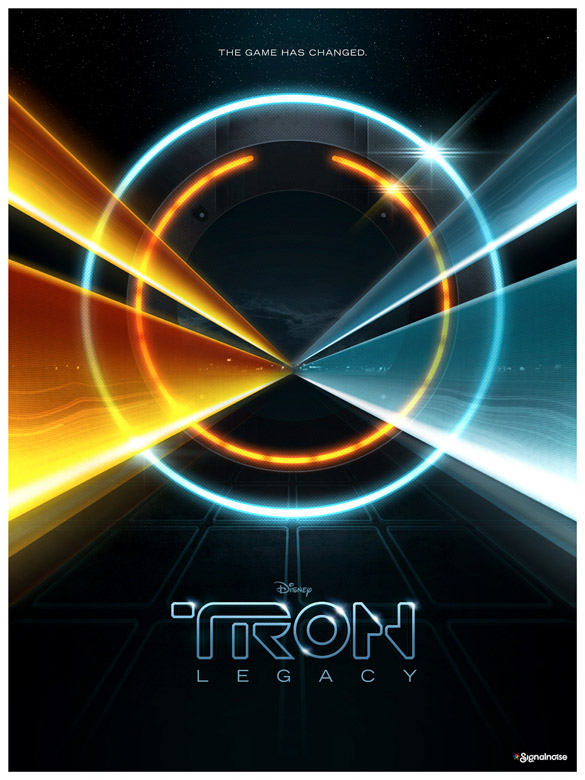 As with a lot of people, I was pretty pumped to see the new Tron Legacy trailer from the San Diego Comic Con hit the web last week, revealing more of the story, characters and super slick neon design of costumes and vehicles. I watched it a bunch just to eat up the overall design.

A year ago when the initial footage for Tron Legacy was released I set about creating my own poster for the film, being a huge fan of the direction and style. My poster flew all over the web, and was even mistaken by Netflix as being the official release which gave me a pretty good laugh. But, the design and palette of the film underwent a bit of a change since that initial footage was released, resulting in my poster being a touch obsolete. Still being pumped for the movie, I cracked open my old Photoshop file and began revising my original design to reflect the new direction. 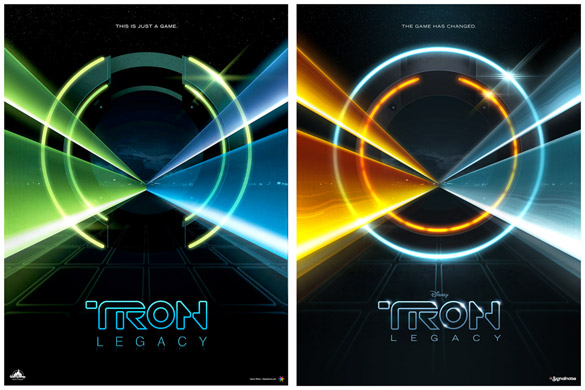 This was a really fun exercise, where I had to revise all of the important elements including the disc design, neon color treatments and lighting effects. I wanted the new version to reflect some of the style updates including the grey-blue architecture design and brilliant amber lighting seen on the character’s wardrobe and vehicles. Here are a few of my disc vectors, including the updated version:

The designs aren’t 100% accurate to the concept design of the film or anything, I just wanted to make this poster interesting and fun. At the time, I presumed the official poster once released would showcase the main actor or something, so I wanted to do the opposite and focus on the film content and style. I treated the revision as if Disney needed the update based on what has been happening during production. As much as I would like to design something for Tron Legacy, this poster design is not official by any means. Just a personal project for the fun of it.

I will be sending this poster to the print shop super soon and will figure out some methods of getting this into peoples’ hands, along with updating all of the Tron Legacy wallpapers I had previously released. Stay tuned!