The process behind Elle 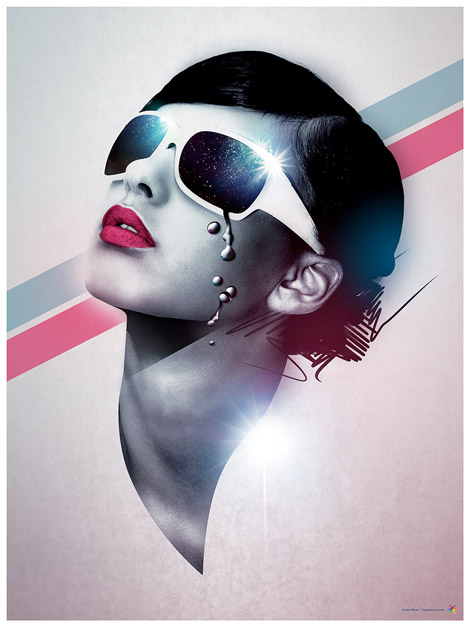 If you are following me on Twitter, you might have caught a bit of the process behind this new poster design last night, which I’ve dubbed ‘Elle’. I decided to show various stages of the design while I was working on it, something I’m not accustomed to and found challenging, a bit scary yet pretty fun.

So, I’d like to dedicate a post to talking a bit more about the poster as I progressed as the 140 character limit didn’t allow for a lot of explanation. This is, once again, a high-level version of the process as there are a lot of subtleties and details I will gloss over for the sake of time. So, here we go . . . 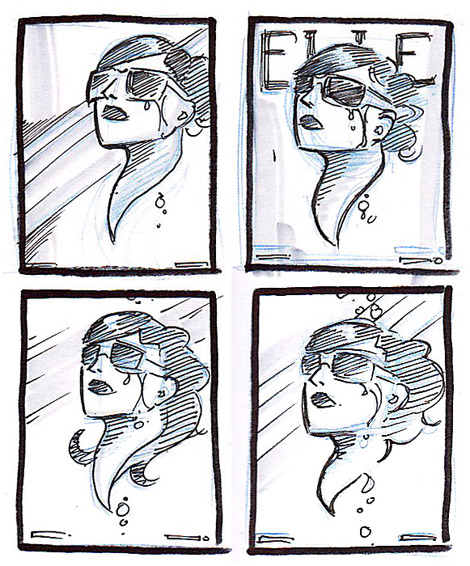 1. As I’ve stated numerous times, everything I do starts with the sketchbook. Here are a few little roughs I created to see how the overall design might drop. It has a few variations here and there, but I generally had an idea of what I wanted to accomplish. 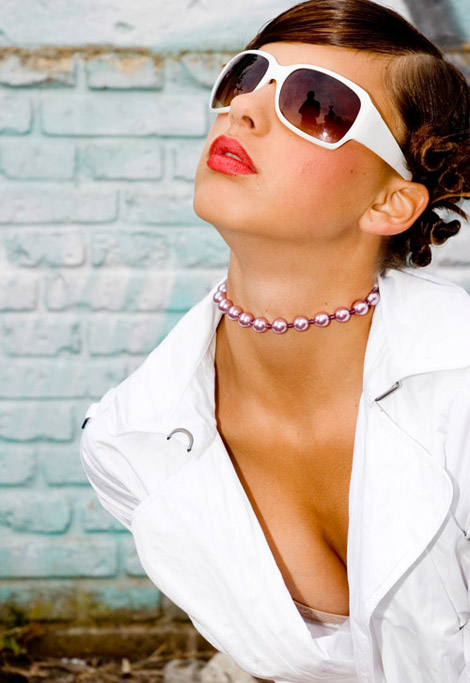 2. I then needed a dame, and this image might work nicely. I had this image onhand while doing the sketches above which is why things look consistent. Much easier to conceptualize when you don’t have to guess or hope the right pose is found. I obviously need to tear this image to pieces in order to achieve my goal. 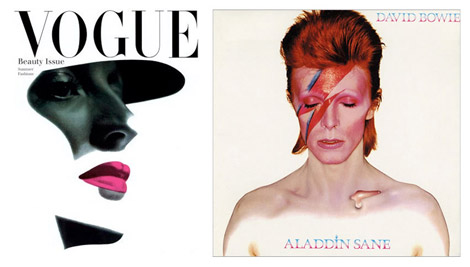 3. Lets throw in a bit of inspiration to keep me going. I came across this Vogue cover a while back and really wanted to attempt a poster in this style. The palette is really light with the monochromatic face, very nice. I have also always loved the simplistic design of Bowie’s cover for Aladdin Sane, so I kept that image close by as well. 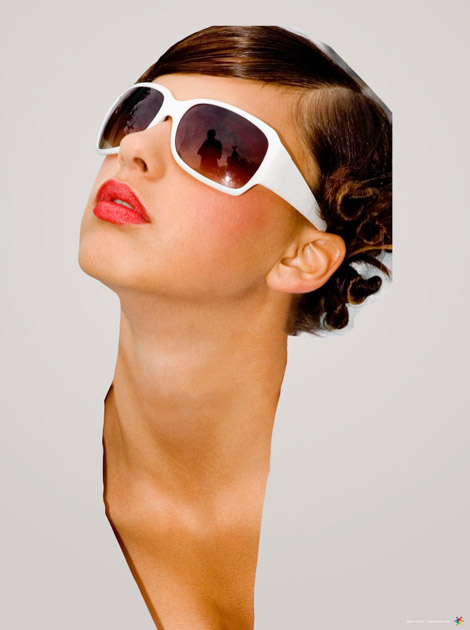 4. Time to crop this lady out. I like the idea of smooth selective cropping and I wanted to try this with the neckline. I also chose early on that this wasn’t going to be a dark poster, so the background is lighter this time around. 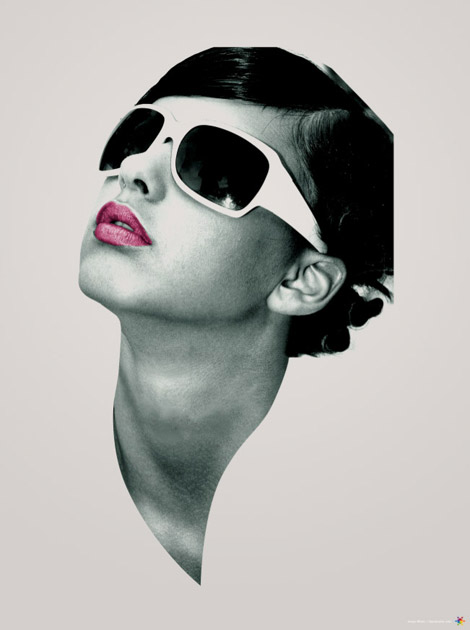 5. Now that the cropping was coming around, I started messing with the overall palette to see what works. I ended up working on the skin tones for a very long time as I wanted a slight blue/green tint but I didn’t want the dame to look like Frankenstein. I noticed the hair was also going to be a problem with where the image was cropped. I knew I needed to sort that out somehow, but it could wait. 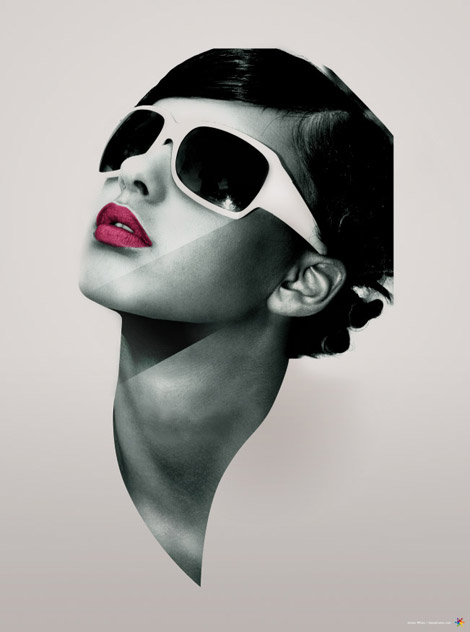 6. Now the skin was starting to shape up. I did a lot of blurring and airbrushing to get rid of the grittiness which resulted from me changing hues and levels several times over. I wanted to maintain a bit of roughness (like the Vogue cover) but I didn’t want the skin texture to look like a hack job. I also added a but of selective highlight and shadow bits to make the photo look a bit more interesting, and put in a flat pink for the lips. 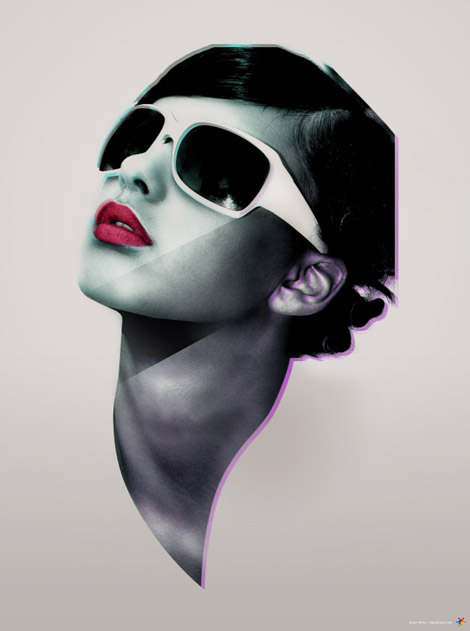 7. I ended up ditching this color idea because it made everything look blurry, but I wanted to show this anyway because the idea of using purple and blue as main colors would come back around later. Decent idea, but not this execution. 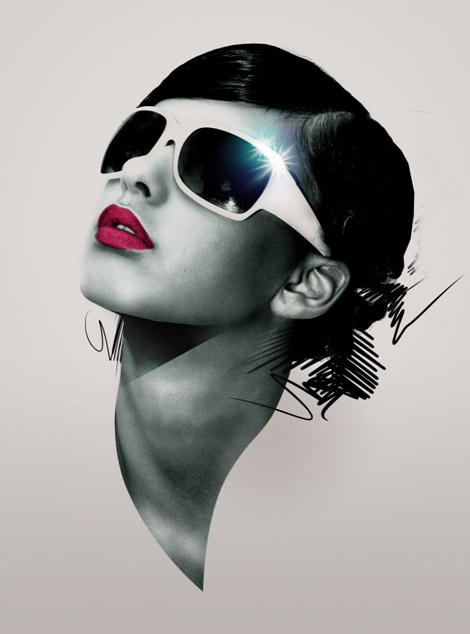 8. I fixed up there hair with some scribbles. I like adding some hand-made elements to my work, like splatters and things, and the orientation of these lines made for a nice back piece for the hair. It also covered up that crumby hard crop that was giving me troubles earlier. I did some more skin color work here, and added some flares to make the sunglasses pop out. 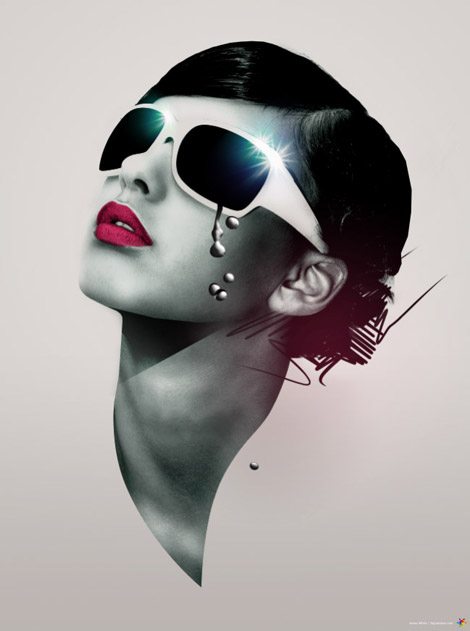 9. In keeping with the original sketches, I really wanted to add some tears or some sort of liquid streaming from the eye area. I got the idea of having the lens strangely melting down over the frame and cheek, so I got several photos of whatever dripping, cropped out the drops, and adjusted the levels to make it look like mercury. The lenses got completely blacked out as the reflections were competing with the drips. I also added a bit more color to this version with that pink burst over the scribbles. 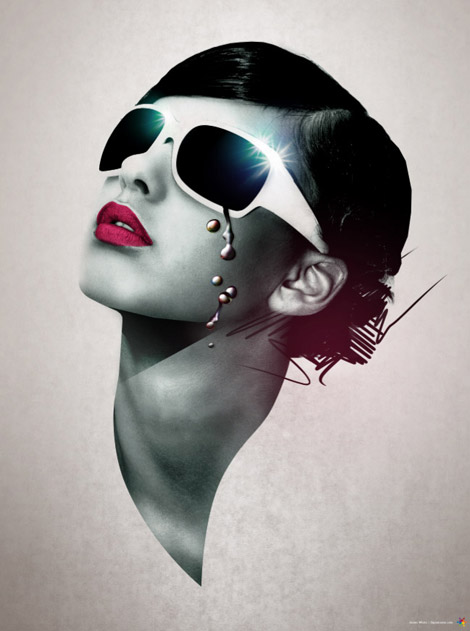 10. I realized that all of my mercury drops had the wrong lighting compared to the rest of the image, so I flipped them all around in order to match things up and added a touch of color to them. I hadn’t worked on the background at all until this point, so a bit of rough texture was added to put a little interest back there.

11. And finally, I added a few more lighting bursts, some stars reflected in the lenses of the glasses and come subtle color overlays to bring all the different palettes into the same league. Those stripes were also a last minute decision as I didn’t want the poor girl just floating in empty space.

And there you have it. I would also like to point out that all of the photography and bits used in this design came from Thinkstock.com. Big thanks for the weaponry, guys!