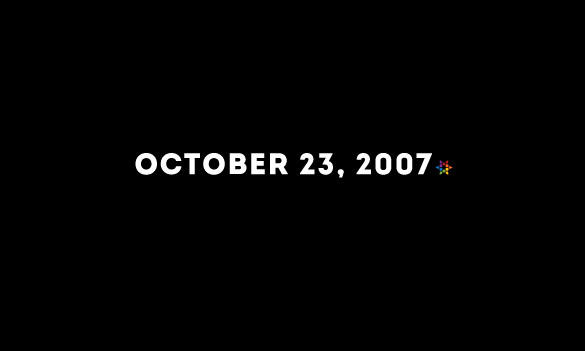 5 years ago today, everything in my little design world changed. Yeah, that’s a pretty high-falootin’ thing to say but it’s the absolute truth. Let me explain…

In 2007 after the release of my first and only book, I was trying to figure out what the next logical step in my career was going to be. I mean my “personal” career. I was working at an agency at the time but worked feverishly on my own little projects outside of the office. My book kind of summed up everything I did in my twenties and put all those unfinished projects to rest. And for a bit more perspective, I registered Signalnoise.com in April of 1999. I was flopping around like a fish on the wharf during those 8 years trying to find my artistic voice. Inspiration without direction. For downloadable evidence see the Signalnoise Graveyard and the myriad of Signalnoise logos.

I was hanging out with my pal Chris Toms one evening when I decided to start a blog. Nothing profound since blogging had been around for years prior, but I never considered Signalnoise to be a blogging platform. Maybe this new direction would give me a reason to update my site with new work? It was worth a shot. Within days Chris had me set up on his host and WordPress functionality was installed. On the evening of October 23rd, 2007, I wrote my first meagre post aptly titled Signalnoise in development:

If you happen to come across this blog please be aware that it is under construction. I am currently building a better compatibility between my personal site and my Flickr account. I’ve come across a few wonderful Flash applications that make a seamless connection to Flickr accounts, something I’ve been searching for.

So, thanks for your interest. Please come back for something better once the foundation is built.

What a knucklehead, huh? In the days following I would write a few little posts on the creative process, started breaking down some of my personal techniques and experimenting with some different art styles. Again, nothing profound. I think I had 13 visitors on my site that month but I didn’t care. That’s when everything changed… I stopped creating art based on trend or acceptance and started creating art for myself. I started having fun. I started to play. I started to explore.

For the first time in my career, Signalnoise.com had become to backbone of my work rather than just a display tool. I wanted to keep it fresh, which meant creating new art and content. They fed each other. A few short months later I was contacted by an up-and-coming design blog to do my first online interview. The email came from a guy named Fabio Sasso and his little Abduzeedo website would expose my art to the world.

Why am I writing this? Well, I get asked by a lot of students and design professionals about how I “did it”. And the truth is there’s no secret ingredient. I made a decision and stuck with it, started small with that goofy little post above and have been building Signalnoise pixel by pixel ever since. Back then I never would have guessed I’d still be doing it 5 years later… but I probably wouldn’t have cared either. I was having fun, and that’s what counts.

So today I’ll be reflecting on the last 5 years and the ongoing journey with this little website. It just might get a little weepy.