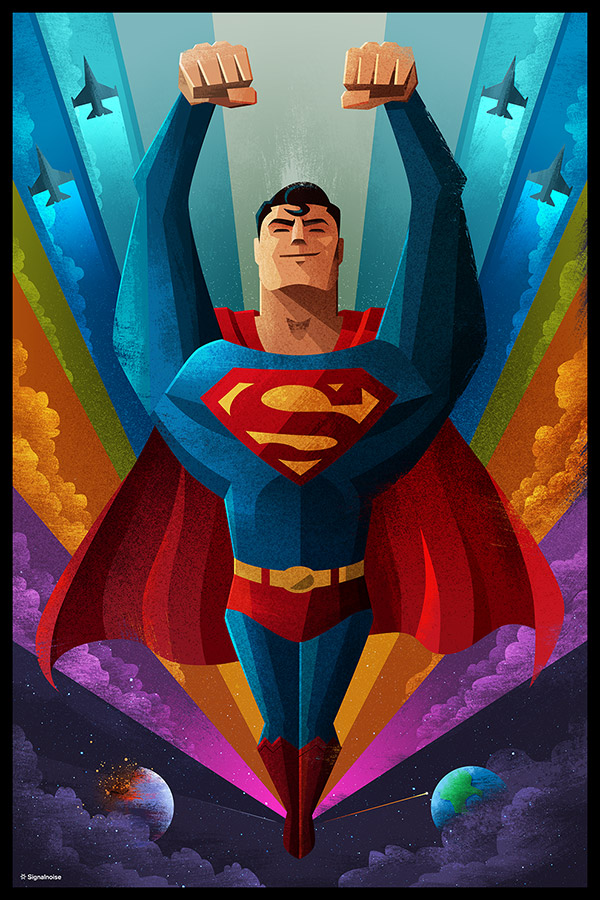 I’m proud to release the poster I contributed to the SUPER poster art show for The Roost in Newcastle, Australia. I was thrilled when the team reached out to me, all the way on the other side of the globe to contribute. They didn’t want duplicate heroes in the show, so selecting which hero you wanted to do a poster of was first come, first served. Luckily for me, the Man of Steel was up for grabs. I jumped at it.

I’ll say this: creating a Superman poster was nowhere near easy, and halfway through I found myself in a tough spot. Here’s the scoop. I knew straight away that I wanted to create a Superman poster that honoured MY Superman. The classic costume, bright colours, smile on his face. Proud. Not the strange version of Superman we have today with that weird costume, desaturated colours, leaking heat vision whenever he gets pissed off… I don’t even know who that guy is.

No, I’ll be designing MY Superman which was a bigger challenge than I expected since he’s been my hero my entire life. I planted about 12 hours into the initial design, only to scrap it days before the deadline and redevelop it from the ground up… while on a plane to Wisconsin. I’m an idiot.

I started with some quick digital mock-ups to figure out the pose, colours and overall composition. The poster had to sum up a number of ideas and not just be a portrait piece. I toyed with the idea of putting in the chrome Superman symbol from the Bob Peak poster, but couldn’t make it look right. Even messed with a “Fortress of Solitude creating the Superman logo” like an Olly Moss piece, but I didn’t dig it. Eventually I arrived at a simple flying pose that looked proud and strong.

That design on the right was created in Adobe Ideas on my iPad during the flight and ended up being the foundation for the pose and palette seen in the final. It was my first time using Ideas, and it really worked for what I needed. Well done, Adobe!

But I didn’t settle right away. I pulled out my Field Notes and started sketching the composition, playing with Superman’s design, angle, arm position and a bunch of other things. What would Superman’s body and face look like? I needed these things nailed down before I got to the hotel in Madison WI so I had very few guesses to make. I had basically 1 day in the hotel to build the entire poster. Yikes.

After I felt everything was ‘sort of’ in place, especially after roughing that sketch on the left I opened Illustrator and got to it. A lot of scrutiny went into those vectors before I moved into Photoshop for all my effects, texture lighting and construction work. The final looks more ‘Bruce Timm-y’ than I intended, but I always kind of drew Superman in the style of the ’90s cartoon… sort of. I also shifted the style and process to mimic my console illustrations done earlier this year.

The addition of the jets and planets was VERY last minute, and I’d like to thank the crew at The Roost for allowing me the slight update. Those little elements add so much to the poster and I’m thrilled they let me get away with it, especially after I had sent them the ‘final file’. You guys rule for putting up with me.

And seen above is the initial idea I started to build. 12 hours of digital painting. I got to the point where the image looked forced. The concept wasn’t very inspired and I became bored looking at it. This is when I made the tough decision to scrap the entire poster and re-think it from the ground up. Now, I KNOW someone is looking at this and about to type “I like this one better”, but when you boil down the 2 concepts this initial one is just a portrait piece. Nothing more. It’s not designed at all, and stylistically it’s pretty dull. I couldn’t deal with that and wasn’t about to sell this piece short. This is Superman, afterall.

So, here’s all the details straight from The Roost! 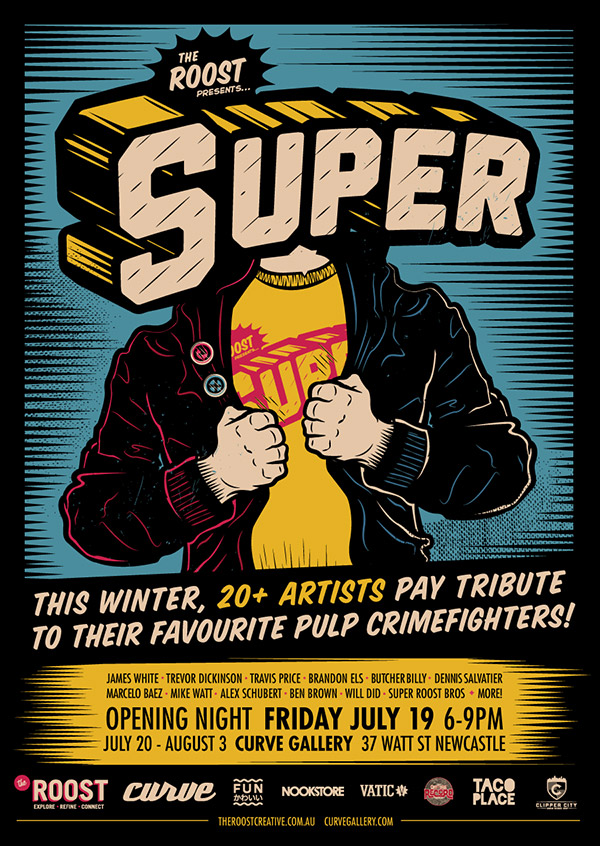 A big thanks to my new friends at The Roost for approaching me to contribute to this amazing show. SUPER opens this Friday in Newcastle, Australia at Curve Gallery. Here is the Facebook event page.