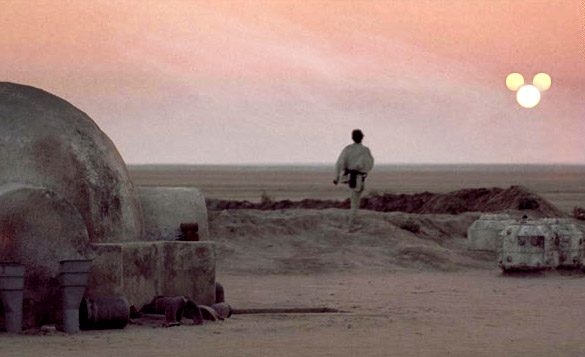 By now, the entire world has heard about Disney buying LucasFilm. The news dropped yesterday afternoon and seemed to have caught the entire world with their collective pants down. Collective pants? Gross. Anyway, I was as surprised and confused as anyone. Universes collided. In all my life I never would have expected to see Vader and Mickey walking hand-in-hand.

As anticipated, the angry nerd kingdom of the world exploded onto the internet with all their fear and hatred regarding the news while everyone else scrambled to make some dumb meme. Pretty standard as nerds tend to knee-jerk whenever anything swoops too close to a franchise they enjoy. Are they wrong? Not necessarily. Are they right? Not really. And this comes from a lifelong Star Wars fan. I was born in 1977, my blood is still 87% rancor. But at nerdy emotional times like this, maybe it’s a good time to step back and look at this thing with a wider lens… or with a weird slow-motion capture rig thing.

Right off the bat, these are business people. Like it or not, this deal made complete and total sense from a financial standpoint. Disney can make all kinds of Star Wars stuff in the coming years, and LucasFilm just made a ton of cash. Fandom doesn’t factor into the numbers at this point. Sorry to be so cold (remember, I love Star Wars too), but it’s a fact. Being “independent” is cool and hip, but when a company gets big this kind of stuff is viable and inevitable.

Let’s also look at Disney’s track record over the last couple of years, with one major example. After Disney bought Marvel, much to the (same) chagrin of the nerd community, they put out some of the best hero movies that have hit the screen. Namely CAPTAIN AMERICA and THE AVENGERS. Imagine if LucasFilm was bought by the people who made CRANK or MEGASHARK. Ugh. Disney has around 100 years of movie making experience in 2D, 3D and live action. They’ve done feature lengths and television. Just because they own a lot of other companies doesn’t mean they’re bad… it actually means they’re good at what they do. Very good.

And finally, George Lucas is 68, man. When the 9th Star Wars movie comes out in 2021 he’ll be 77. That’s getting up there. Not to be grim, but when the head of a big company is suddenly not there it changes things. Just look at Apple. On the longterm Disney (arguably) might have longevity greater then that of LucasFilm when it comes to getting these last few movies done. That big and historic infrastructure brings with it a bit of comfort, y’know? Bit of padding.

I know this post will cultivate some arguments and I would LOVE to hear your thoughts. But please keep in mind, this is not meant to be a staunch defence of Disney and everything it is. My main point is that our beloved Star Wars universe may have fallen into the right hands. Money and corporate arguments aside, we just might see some fun Star Wars movies soon. LucasFilm is good at that, and so is Disney.

I’d much rather anticipate a nice team-up of movie-makers on a franchise I love than sit with a scowl on my face for the next 9 years.