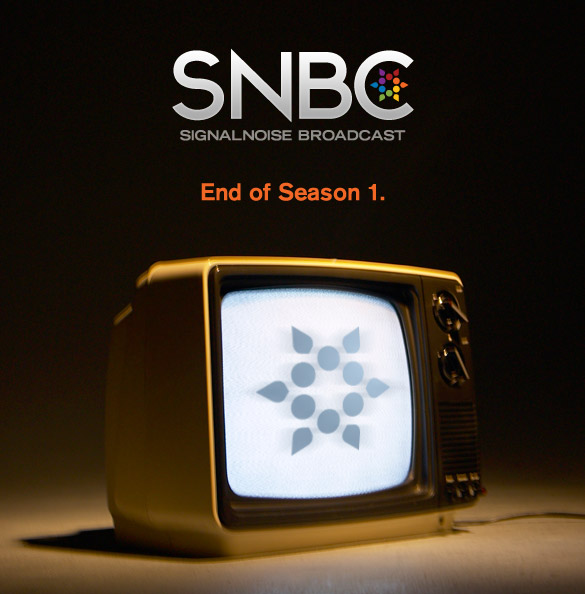 For over a year now I have been doing my weekly online design show called SNBC, which stands for Signalnoise Broadcast. Every Thursday at 3pm EST I rig up my Rockband microphone to the laptop, switch on the webcam and discuss what I’ve been working on, upcoming projects and answer questions posed by the audience. Sometimes I do Photoshop or Illustrator breakdowns, discuss my process and show how I built some of my posters. I have topic-based broadcasts, and just design discussion in general. Sometimes there are special guests, but mostly it’s just me in my home office.

64 shows have been recorded, which means over 64 hours of SNBC in all it’s forms. That’s quite a pile of creative talk. No rock left unturned. Many topics, many laughs. Not only did the audience get to know me a bit better, but I got to know the viewers who show up week after week to participate. I even met a bunch of you through events and conferences. Amazing little tribe. I cherish the loyal viewers who drop in for every broadcast and those who wander in after seeing a tweet to see what’s going on. You have all made every episode an awesome time.

There are 2 main goals of my doing SNBC every week: 1) it’s good for me to analyze my own processes in order to clearly convey it to help others, and 2) I want every episode to be an engaging experience for the audience. That’s it, top goals. It’s really that simple. However, over the last few weeks I’ve found it a struggle to come up with new topics and noticed a lot of repetition in my dialogue and answers. In short, I feel the live content has been weakening a bit, and the last thing I want to do is give a loyal audience something I don’t put serious effort into producing.

So for now, what I’m going to do is take a little break from doing the weekly show. Call this the end of SNBC: Season 1. I need to step back and look at what worked, what didn’t and put some serious thought into a format that will be superior to what I have been doing and provide content that will vary from week to week. Something planned out ahead of time. Something cool. There’s no timeline in place yet, but I’ll keep you all in the loop on Twitter as to when Season 2 will kick off and you can still watch all 64 recorded episodes.

A huge thank-you to everyone who has tuned into SNBC for the last year. I can’t say how much it means to me that you’d take the time out of your busy afternoon to drop in and say hello. Your questions and comments mean the world to me, which is why I’m putting some effort to make this thing a bit stronger. Thanks so much, everyone.

We will return after these messages …