If you missed tuning into SNBC: 42 live last week, here is the recorded version for you to watch. I didn’t have a topic this week so we went with a general QA session where we covered topics like personal project workflow, the new office space, The Sword poster process, Iron Maiden, can creativity be a learned skill, the importance of an online gallery, what I look for when proofing, how I became #1 on Google for the search ‘Flickr photostream‘ and a whole lot more. Have a watch, have a laugh.

Additionally, this broadcast was the first installment of ‘Ask Jerko’, a little section at the end where my pal Jerko answered a few funny questions sent in by the viewers. We talked about metal, food and other stuff. He’s a hoot.

This week on SNBC:43 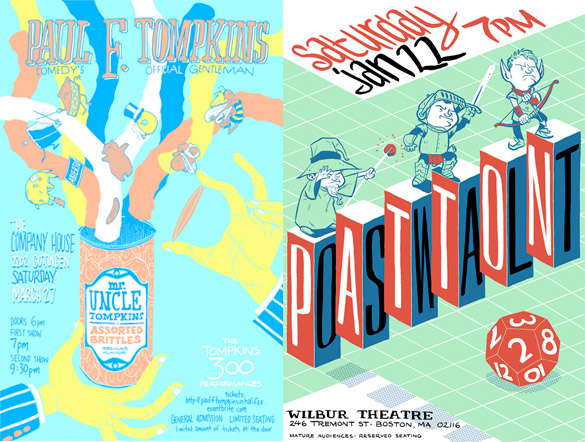 This coming Thursday will be a really fun broadcast as I will be having my first guest coming over to hang out, my good pal Mike Holmes. Mike is a very talented illustrator living here in Halifax and has released several graphic novels such as Shenanigans (Oni), This American Drive (Invisible), This is a Souvenir (Image) and the upcoming True Story (Invisible). On top of that, he created posters for the likes of Paul F. Tompkins and Patton Oswalt. Mike will be over to talk about his illustration process, stories from working in the industry, his inspirations, etc.

Swing over to his Tumblr and Flickr to see Mike’s work and be sure to drop in this Thursday at 3pm EST for SNBC: 43. You won’t want to miss this one.