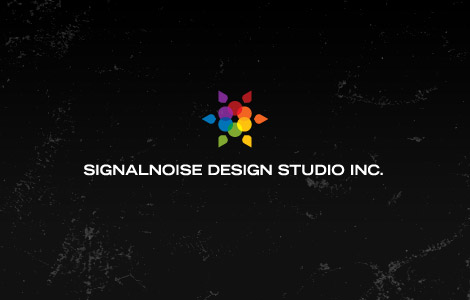 It’s been a little while since I gave a bit of an update on what’s going on around these parts. I like having a more frequent update schedule on Signalnoise with work and inspiration stuff, but sometimes client and preparation work steps in and must be done. It’s all fun, but leaves little time for writing.

So, here’s the scoop. As of a few weeks ago Signalnoise Design Studio Inc. has become an official business entity. I have been operating as strictly an individual freelance artist for the past few years and I felt it was time to make the push and set up the structure needed to grow in the business realm. So I have been going through the motions of setting up everything needed to get all processes running smoothly. It’s all new and weird, but it’s all exciting.

At the same time, I’ve been working diligently on a new version of Signalnoise.com. If you’ve been following my tweets over the past while you would have noticed me bitching about CSS stuff, and that’s why :) When it comes to my website I’m a real sticky bastard about not changing things too drastically, mostly because I’m happy with how simple everything is and I don’t want to have to get used to some new crazy thing. So, the new Signalnoise.com will be a bit beefier but maintain a similar overall aesthetic. I have no solid launch date as yet, so all I can say is ‘soon’.

While at the same time I’ve been working with some really great clients, two of which are Reckless Love and Nike while cultivating some new exciting jobs over the past few weeks. Not only will I be kicking off these new projects, but the next few months will see me speaking at FITC Toronto (see my presentation entitled Back to the Future) this April.

On top of everything else, I just returned from an excellent trip to New York where I took part in Immersion Day at Getty Images’ office as part of the ThinkCorps team. I’ll have more to say about this soon as it might require it’s own post, but some big highlights were meeting folks like Adelle Charles and Josh Smibert from the mighty Fuel Brand Inc., fellow canuck Chad Mueller from Inspiredology, John Fiorelli of the Cut & Paste digital design tournament and a bunch more. Awesome bunch to hang with.

As you can see, it’s been a wild 2010 for Signalnoise so far with no sign of letting up. Just the way I like it.