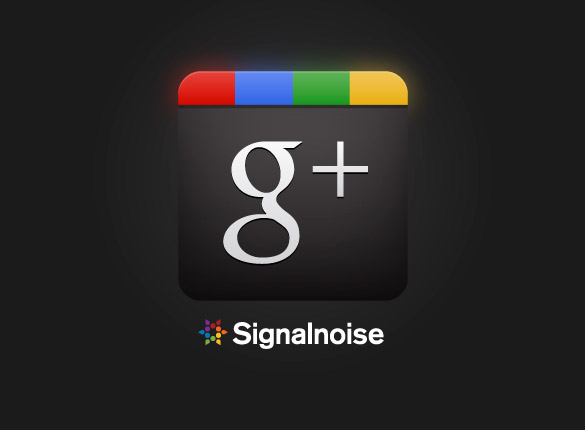 I’m a really hesitant guy to jump on board any new “community-based whatever” on the web these days. I’m cautious about spreading myself too thin, having stagnant accounts all over the place, and just a general need to have my work centralized. It’s all about housekeeping around here, I like simplicity.

However, when Google recently launched it’s Google+ platform, I decided to give this new thing a shot. I was generously hooked up with an invitation by my pal Fabio Sasso and was off to the races. Before plugging it on the blog I wanted to take a week and experiment with it. Launch a few previews, set up my contacts, just to see how the vibe was on this new sharing platform. Have to say, I’m rather pleased. Even added it to the top-right corner of the site for safe keeping.

So, if you are one of those Plusers, swing by the James White Google+ and have a look. There might even be a Signalnoise hang-out in the near future. And why not say hello to these fine folks as well:

Now, the last thing I want to do is offer up a review of Google+. I suck at dissecting the ins and outs of usability so I’m not even going to attempt to sound smart in that area. Plus, there are plenty of opinions already floating around as to why Google+ is good/bad. But as a creative guy with a bunch of nice online pals and connections, and who is looking for a Facebook alternative, Google+ ain’t too shabby. Looks orderly, stuff is clean, it’s simple with all kinds of subtle user-friendly features. I dig it.

Will it crush Facebook? Nobody is a prophet, man. Just see for yourself.