The process of Alex Varanese 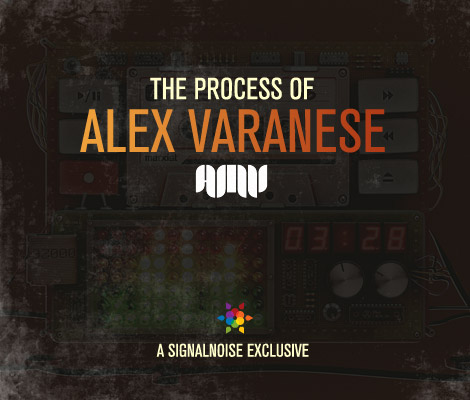 A few days ago I posted some choice designs by the talented Alex Varanese. After leafing through his work for a few days, I reached out to Alex to see if he might be interested in writing an outline of the process behind one of his recent works. I was very interested to see how he tackles creating his unique art, and I’m sure other readers are in the same boat. I was thrilled that he agreed.

Check it out as Alex dissects the tools he uses, the planning and process he goes through to conceptualize his works, some ‘in progress’ shots and discusses some hilarious bits along the way.

A huge thanks to Alex for letting us all get a glimpse behind him and his excellent work. I’m very excited to announce the first Signalnoise Exclusive starring Alex Varanese. Enjoy!

For me, producing a piece of art is a lot like child birth. Not so much because I’m bringing something new into the world, but because I’m hopped up on drugs so powerful that they have to be injected directly into my spinal column. I’m kidding, of course. Everyone knows that winners don’t use drugs. Winners do use a variety of tools, however, and I’d like to talk a little about the ones I use to create my work. Specifically, I’ll be dissecting the very first piece I created in my current collection; it’s called “February ’06” (which is strange, since it was made in September of 2008) and it’s the first entry in a 6-part series called Circuit Bent Type:

Let’s start with the basics: I come from a 3D illustration background, so I tend to think in terms of objects and places rather than photographs or 2D shapes. I had a few goals for the Circuit Bent Type series, and I wanted to make sure the first piece hit them all:

As is the case with a lot of my ideas, the general layout came to me all at once. I knew I wanted the term “LO-FI” to play a central role, and I had vague images in my head of some kind of homemade cassette-playing apparatus. I immediately committed the ideas to paper to make sure I wouldn’t forget anything: 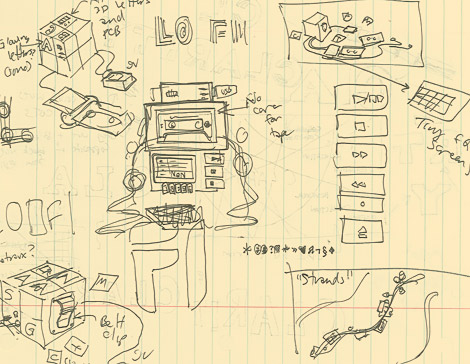 If you’ve seen the rest of the Circuit Bent Type series, you’ll recognize early versions of other pieces mixed in here as well. As you can see, these borderline scribbles aren’t meant to impress; I generally sketch as fast as I possibly can to keep up with the flow of ideas out of fear that I’ll miss something. Then, approximately 7 seconds of frantic chicken scratching later, I catch my breath, notice that my million dollar idea didn’t abruptly vanish after all, and wonder what all the fuss was about.

You’ll notice that quite an evolution took place between this initial idea and the finished piece. My sketches are always more of a loose outline than a blueprint. The following screenshots are taken from 3ds max, my full-time renderer and part-time lover, and give an idea of what the modeling process was like: 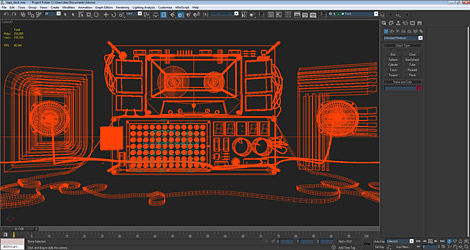 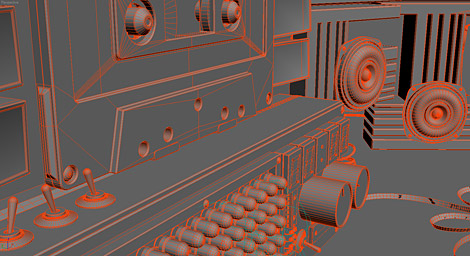 I tend to model and texture in separate phases, so my first goal was simply establishing the geometry of the scene. The following “clay render” is what the piece looks like without any materials applied:

With the modeling complete, I began the soul-crushing, thanklessly laborious task of unwrapping the texture coordinates of each mesh and painting textures to wrap back over them. In total, this scene required 44 separate maps, most ranging from 384×384 to 2048×2048. Here’s a little collage of a few of them: 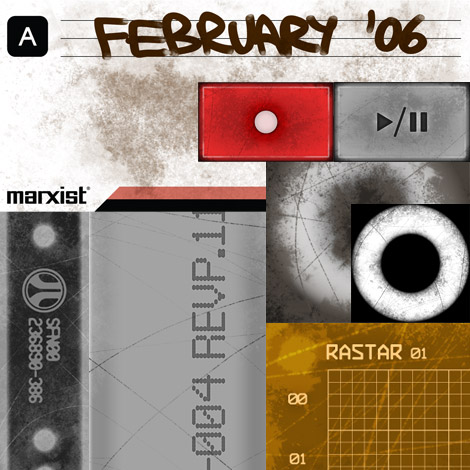 The party then moved to Illustrator, where I prepared a few typographical elements for the final composition. I used an ultra abstract typeface I’d recently designed called Edgewise to spell out an appropriately cryptic phrase from one of the real audio cassettes I used as a modeling reference: “SUPER PRECISION ANTI-RESONANCE / CASSETTE MECHANISM HIGH BIAS EQ”. It was either that or “PAPA DON’T PREACH / I’M IN TROUBLE DEEP”. The combination of a meaningless message and nearly illegible lettering allowed for a text element that would fill the space in a visually interesting way but wouldn’t demand specific attention from the viewer.

I was then ready to start stirring it all together in Photoshop: 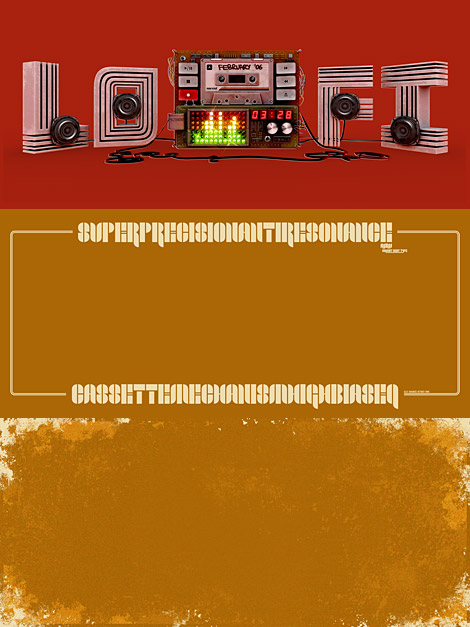 These are the three basic layers of the piece: the original render from 3ds max, the typographical lockup from Illustrator, and a grimey background I painted using grunge brushes I’d created from some texture photos I took around town. To really drive home the retro feel, I finished up by overlaying some noise and about a bajillion adjustment layers to tweak the color balance, saturation, levels and so on. Check it out: 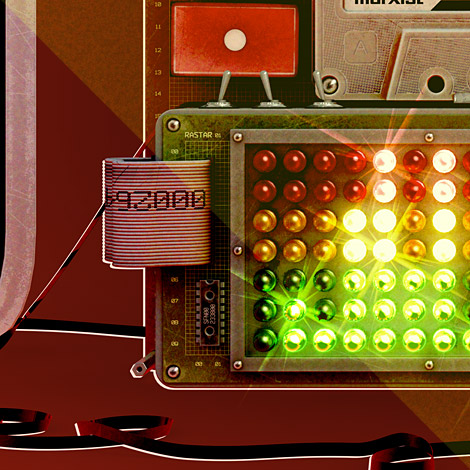 The bottom half is the unmodified image, all drab and vanilla, while the upper half is straight up old school playa-hatin’ funk. The combination of a 3D render as the base imagery, vector and typographical elements on top, a grungy texture layer on the bottom and a heavy dose of hyperstylized post-processing to tie it all together worked well and set the pattern for most of the work I’ve done to date. Here’s the final piece again, as well a number of full-res closeups taken from the original 36×16″, 300dpi PSD file: 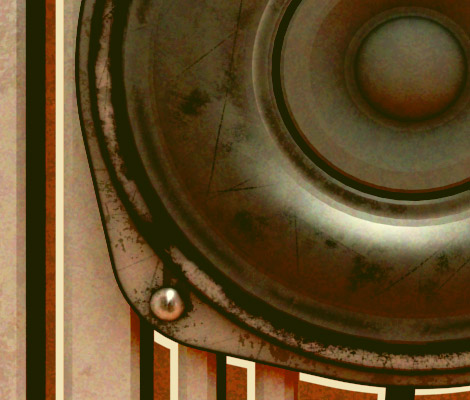 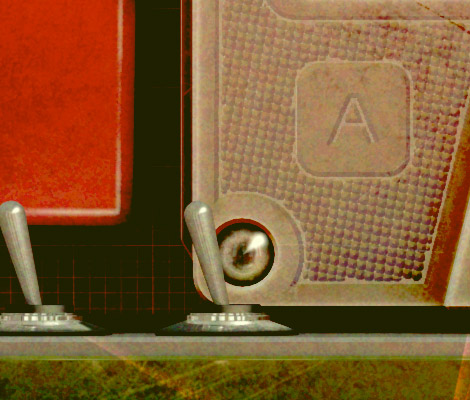 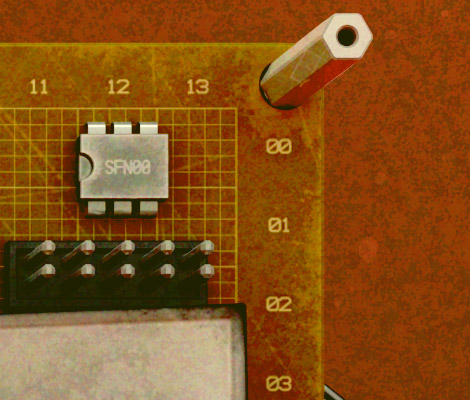 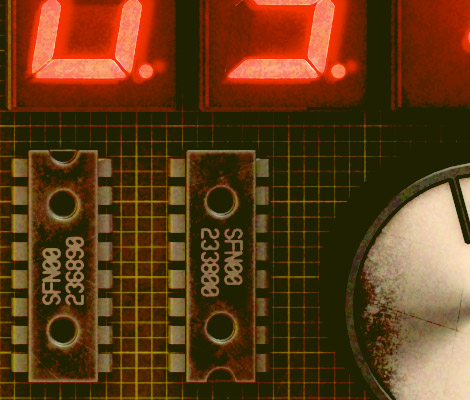 In summary, my approach to the creative process requires three fundamental elements: rendered imagery, thoughtful typography and fabulous hair. In practice I rarely achieve more than two of these at any given time, but it’s the constant struggle for the trifecta that keeps me on my toes.