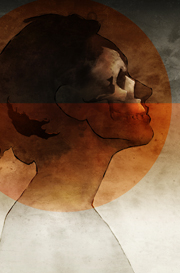 This is the second large format piece constructed using the previous photoshoot with Sarah. After the initial rendering of the figure and skull was done, I loaded the textures on top and started peeling them away one by one which led to me having a far better understanding of how the colors were being influenced. Oddly enough, most of the textures were deleted before the final image emerged, which makes this piece a bit clearer then the previous.

I was told by a friend that when making music it’s important to put many musical elements on top of one another in order to get a full grasp on how they are effecting one another. Then muting or deleting each level to see which way the composition swings. I tried very hard to keep a similar process with this piece, which led to the image shifting drastically a few times. The piece was green at one point, and a mistake made me realize orange was the route to go with. Perhaps next time I’ll keep a series of snapshots to show the different steps as the image evolves.

Large print tests will be soon to ensure my colors are being translated properly to paper. This will be done next week, as well as a hopeful second photo shoot with an established model here in Halifax.