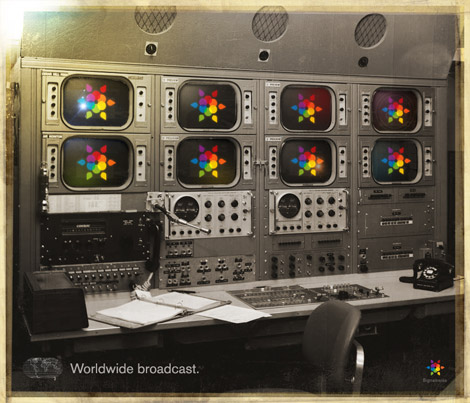 I have been using this new icon for a little while now, which began as a style experiment, was applied to a wallpaper design for Smashing Magazine, used as a variant Varo logo, animated for my MTV Engine Room submission video, and eventually I started using it as a Signalnoise icon for my newer works. I have been tossing around the idea of a Signalnoise re-brand for a little while now as I feel my work and website has outgrown my winged skull design.

So after a lot of pondering and a lot of advice from friends, I will be working on phasing out my current Signalnoise logo to replace it with this new colorful identity.

The new identity was greatly influenced by colorful television broadcast graphics from the 1970s (namely NBC’s peacock). I wanted something simple that might lend itself to some nice animated sequences yet hold it’s own on the corner of my poster designs. I do have a soft spot for my winged skull, but I felt the time was right to evolve my personal identity to something a bit more appropriate.