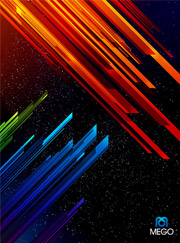 The newest piece, entitled Mego, was inspired by a recent conversation with a friend. We were talking about animation and toys from the 70s and the Mego Corporation came up. Mego was a toy company started in 1971 and made licensed toylines for Star Trek, Wizard of Oz and superhero figures for both Marvel and DC. They suffered an eventual downfall in 1983, which resulted from turning down the then unheard of Star Wars toyline in 1976.

As I mention in recent posts, I have been greatly inspired by the cosmic design of 1970s television graphics and started watching old toy ads as well. I found the Mego logo, recreated it, and decided it was a nice addition to this piece. It was designed at 18 x 24 and will eventually become a print. You can also check a detail here.