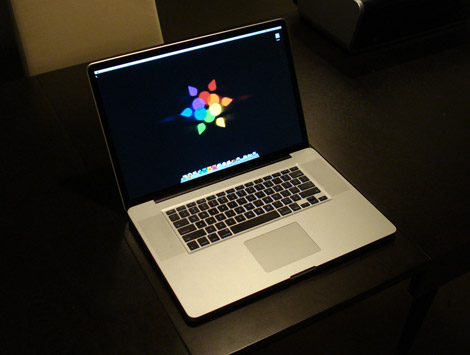 After about a month and a half of researching, flip-flopping and scratching my head, I finally took the plunge and ordered my new system, a sweet little Macbook Pro 17″ which I affectionately named ‘Beast’.

I wanted to hold off on posting anything right away regarding the new computer just to have a bit of time to get to know it. Not only did I leap from a PC to a Mac, but also from Adobe CS2 to CS4, so the past week or so was a lot re-learning keyboard shortcuts, file systems and all the little processes I take for granted as I work. It’s like trying to drive before locating the steering wheel.

So after a week of crunching through Photoshop and Illustrator as I continued with my freelance jobs, Beast passed all of my tests with flying colors (literally). The glossy monitor is stellar with nice bold colors and I love the simplified design with it’s sleek silver casing and utilitarian black rubber keyboard. I worked on some stuff last week at my local watering hole, something I had never done since I had only owned desktops until this point. I feel like I’ve been living in the stone ages.

The last Mac I owned was a Performa circa 1996, which would freeze up in the middle of summer on the equator. The bad taste in my mouth led my straight to a PC (Dell, to be specific) which I had been faithful to for 10 years. Yet here I sit, enjoying the cool aluminum below my palms and marveling at the adorable little icons at the bottom of my screen.