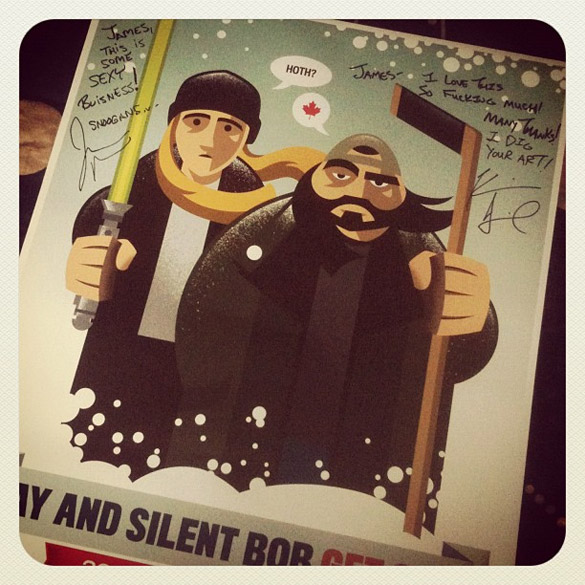 The past 3 weeks have been an absolute blur. As you can see on the blog and Twitter I’m doing an awful lot of posting and jawing about Kevin Smith and everything that has been going on. This all started with that one Canadian tour poster I designed on a whim after seeing a tweet from Kevin asking Canadians to show any art for a potential tour poster. Being a fan and always trying to do things a bit differently, I set some time aside to design up something cool. Something fun.

Well, Kevin was all over it and I was contacted within hours by his troop. That little tour poster hit that mark, and the following week I was hired to design the Plus One Live II poster for a gig in London, England, working with Kevin directly on the goods. At the same time, a much larger project was thrown my way, he asked me to design 10 Jay and Bob posters … one for each Canadian province. Being a fan of his work and a proud Canadian, I can’t think of a better project to be taking on. So pumped. In production now.

Kevin Smith and Jason Mewes were in Halifax this past Monday for their Jay and Silent Bob Get Old show, and near the end of the show Kevin Smith gave a wonderful shout-out and told the story of the posters, how it all came together, and what we will be working on next (see MP3 above). He nails all the points, especially the part about doing what you love. Chasing those projects you truly want to do. That’s just a clip above, be sure to listen to the entire Halifax show.

This post isn’t meant to be self-serving. I want to tell the story as it’s evidence that you should be doing those personal projects, the things that mean a lot to you as an artist. It’s easy to get wrapped up in doing work for other people, but it will always be the stuff you do for yourself that shouts the loudest. You never know where these things might lead, and the only way to find out is to give it a shot. Build your own reality, man.

Thanks to Chris Toms for the photo above.