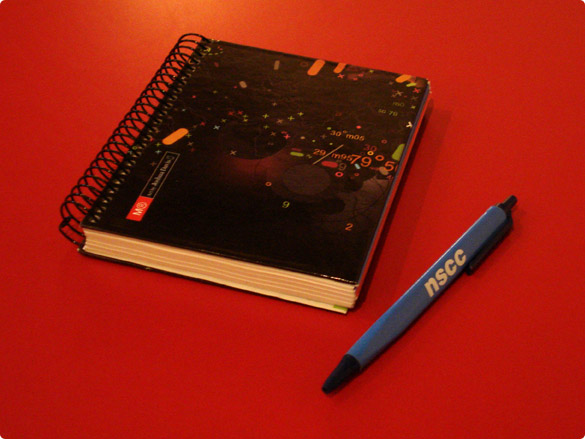 I wrote a post a little while back about the importance of the sketchbook, and how it fits into the creative process. In my experience, that’s where many ideas can be thrown around quickly before moving to the computer.

But for my upcoming t-shirt line I’ve decided to keep a project notebook on hand at all times. My sketchbook isn’t huge but it’s large enough to be a bit cumbersome in terms of portability, so I decided for the first time to keep a little notebook around to jot down ideas whenever they pop into my head. We have all said “Oh, that’s a good idea. Have to remember to write that down.”, and we inevitably forget it 2 minutes later.

This little notebook has been a pretty valuable asset over the past while. Instead of trying to remember all these weird ideas I have, I’ll write it down immediately and maybe doodle a few roughs to keep the idea pure. After that, maybe a week or so later, I’ll look through the idea list and rough up some more completed sketches before scanning and working the design in Illustrator.

It’s a small step in the creative process, but its comforting to know I have a backlog of t-shirt ideas sitting on my coffee table. Incidentally, the notebook I’m using was designed by Joshua Davis and I picked it up at his solo show in Toronto last year.