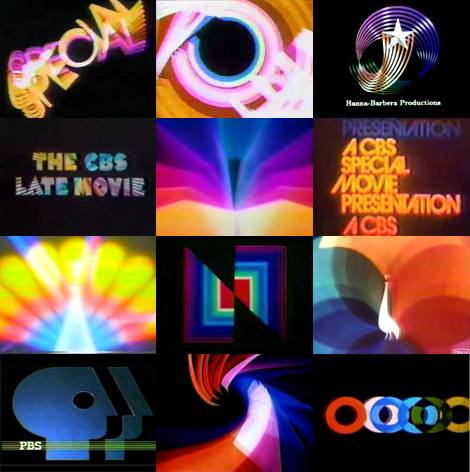 I have mentioned my inspirations in previous posts, but I have been meaning to make a more specific entry about the subject. My recent works have been heavily influenced by television promos from the 1970s from networks like NBC, CBS, ABC and PBS. Some of these bumpers were created before the computer was used to animate in 3D space, while others were created at the dawn of computer generated graphics. Networks wanted to create bright and bold animated logos with the charm of 70s design.

The above graphic is made of simple snapshots of some of these wonderful animations, and it is easy to see the spectrum being used in bold and creative ways. NBC was really the front runner in my opinion, using the spectrum to animate their peacock logo.