I wear my influences on my sleeve, I always have. During school between ’95 and ’98 the internet was really starting to take off in a big way, and having access to so much information and imagery really turned me into a sponge. There were so many cool and innovative artists emerging every day and design portals were rising to the occasion of keeping designers and artists worldwide on the same page (no pun intended). It was an important time for me because I was learning new art tools while experiencing new ground-breaking artwork from around the world.

So I figured a good mode of documentation might be to talk about the people who influenced me along the way as I created my own art and struggled to find my own voice. 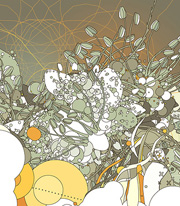 I suppose Joshua Davis would be a good starting point. Josh came to fame by means of his personal Flash-art experimentation site called Praystation, and later launched Once Upon a Forest (his art site) and Dreamless.org (a message forum for like-minded designers and artists). There were a lot of people experimenting with Flash in it’s infancy, but Josh stood alone in his methodology. Not only was he using Flash to create art, but he was also writing code to randomly generate new compositions. In essence, he was teaching a program to create art with bits of code and drawings he supplied, documented his day by day projects on his website, then supplied his source files for download. To this day he makes available his Flash source files on his workshop website, and teaches artists how to use the tools he has developed.

From time to time I will try creating artwork in a similar fashion, but it is more his process and theory that I enjoy. The loss of control he has over his artwork when the computer takes over allows it to take on a life of it’s own, as if he painted the wings of a butterfly but doesn’t know how it will fly until he lets it go.

In a field where it is almost customary for artists to hoard their secrets and keep their creative process a mystery, Davis’ openness about his art really makes him stand alone. Josh is still at it today, running joshuadavis.com and still creating machine-driven art while travelling all over the world doing workshops and teaching.