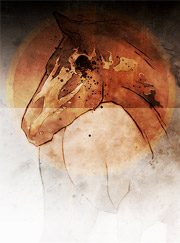 Earlier this week I was asked by two people if I ever considered creating a piece using an animal as a subject. The thought had occured to me earlier in the project, but the notion dropped out of my head soon after as I got swept up in illustrating humans and their skulls. So it was kindly reminded to me, and I decided to tackle this new image using a horse as the model.

I don’t have any original photos of horses at my disposal, so I had to use some found photography to help out with the piece. Then I had to track down some references for horse skulls and spines which turned into quite the challenge on it’s own. Once I got everything I needed, the real fun started as I tried to draw the contours of an animal skull which made me feel like a fish out of water. I was midway through when I realized I had never attempted to draw a skull other then a homosapien, so it was a neat and challenging ordeal.

I also had a very rough time choosing colors and getting a level of contrast I was happy with. Even now, the piece looks less heavy then the others. This new image is a test piece in preparation to tackle the real thing at some point.