Hobo With a Shotgun: Poster process 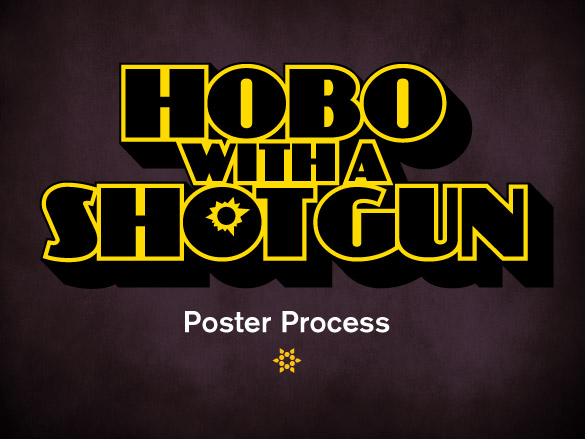 If you’ve seen my Back to the Future presentation at any point this year you would have seen me tell the story of Hobo With a Shotgun and my involvement with the design of some of the elements. I’ve posted about the film before and talked about it on my broadcasts several times, but up until now the full behind-the-scenes gear was only shown onstage. It’s about time I retire that section of the presentation to launch it online for everyone to see.

It’s my favorite story to tell, my favorite project in recent years, and best of all it was all done for friends in order to help them with their project. That’s what it’s all about. We support each other around these parts and Dartmouth blood is thick, especially when being splattered onscreen. I was thrilled when Jason Eisener and Rob Cotterill asked me to design a Hobo poster. While not being the official one used, it was a wildly entertaining challenge. So lets load those barrels and get to it.

I knew early on that I was going to digitally paint the poster, something I’ve been wanting to attempt for a while. A huge challenge, totally out of my comfort zone. I’ve been a big fan of guys like Drew Struzan and Bob Peak for a long time, so doing something like that offered up some unique obstacles which challenged my entire proces. Before I got to building the actual poster in Photoshop, I needed to have things planned out properly and extensively.

Shown above are my original concept sketches and digital mock-ups. I even went as far as doing a meticulous drawing of Rutger Hauer to get myself in the groove of capturing likeness in Photoshop. Again, something I’m pretty unfamiliar with. The digital mock-ups were unsuccessful from a design standpoint, but man, I still love that one of the Hobo blowing away the person looking at the poster. So funny.

The great thing about working with the guys is they have a really specific style in mind, and they can express it in art samples. Crazy helpful. Shown above are some color examples Jason sent over that he used as inspiration for the lighting and palette of Hobo. Bright pinks and purples are top priority, which I didn’t know since I hadn’t seen the film at this point. This really put me on the right path. Here are some digital mock-ups I put together with the new colours in mind.

I started some new mock-ups with the proper palette and vibe and things started to click. Again drawing on inspiration from Struzan, I collaged together some of the photos Jason sent over to get the composition nailed down. I can see a big Star Wars influence in there, which was fine since me and the Hobo guys are all kids of the ’80s. VHS culture, man. You might be able to see a Bill Sienkiewicz vibe in there too, I was looking at old Dazzler comic covers at the time.

Once the composition was coming along, I decided to do a vector colour study before moving onto the digital paints. Having the photos were great, but I wanted to dilute the composition to know exactly what my palette was going to be. So I got rid of the details and roughed up the above image using simple shapes to represent the areas.

I should also mention that you’re going to see changes in layout and characters as we go. The poster was a total work in progress in terms of what characters would go where, even during the final stages.

After all that planning I was finally able to leap into Photoshop and start building the paints. I took a semester of foundation paint at a local art school back in 2004, and even though I didn’t enjoy it that much I took from it some important techniques which lent itself quite well to Photoshop. I learned to block things in and layer colours on top of one another to build palettes and texture. Very helpful at this stage.

Shown above are my initial steps. Really rough and simple at tis point as I mapped things out. A big challenge was to let the brush in Photoshop act like paint. It was oksy to get a bit messy with it and let strokes fall outside the lines. It suited the content, y’know?

After many, many hours of digital painting the palette was starting to get away from me, as shown above. It didn’t have the life those initial compositions had and the colours were not near what I wanted. I did the “morning after” test, you know, when you sleep on it then wake up and hate what you’ve done? Yeah that. So I took an entire day, ripped apart my layers one by one and started adjusting everything. Added some new effects and dry brush textures to this thing.

By the end of the day, this is where I was:

Now we’re talking. This was where I wanted to be. I dug it, the guys dug it. We were off to the races.

So after a great many hours painting textures, splatters, characters, lighting and effects … the final poster emerged. The scene changed as I went, but it captured that initial flavour we all really wanted. Something fun, and cool, which would be very happy on the cover of a sun-bleached VHS box.

In the end, even though this wasn’t used as the official Hobo poster or box art, I wouldn’t trade this project for the world. It was created for a killer movie, a killer Dartmouth movie, for my friends. And it offered up some real challenges which put me in a place I wasn’t familiar with. I learned a huge amount by working on this thing, about the medium and about myself as a creator. To date I’ve only printed 2 of these things at full movie poster size, but more are in the pipeline for sure. You’ve been warned. There you have it.

And finally, if you haven’t seen Hobo With a Shotgun yet … what the hell are you waiting for?