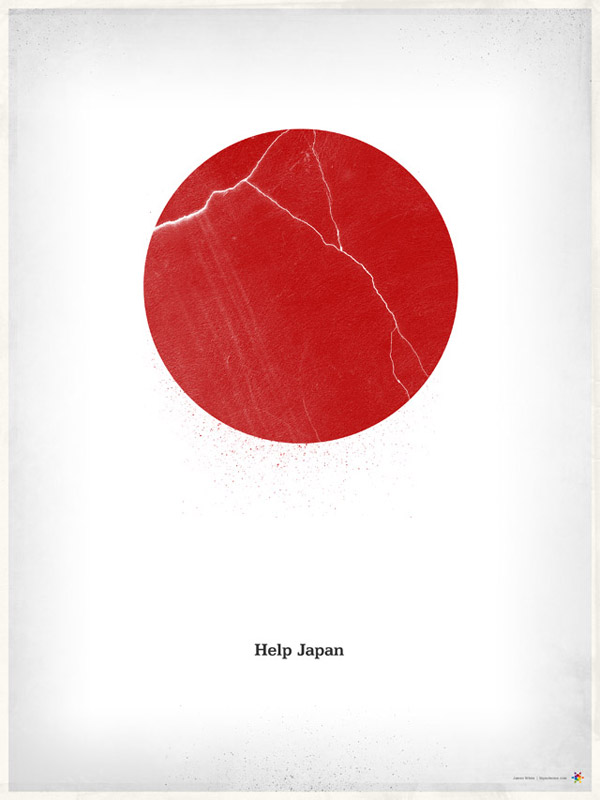 If you know me at all, you’ll also know that I don’t discuss my Help Japan poster very often. Of all my posters and designs it was the one that reached the furthest, was seen by the widest audience, and galvanized charitable funds far above my expectation. This all happened 2 years ago and it’s taken me this long to approach the subject publicly, and personally.

I create lots of stuff, the size of my portfolio is proof of that. So when something happens where I think my creative efforts may help, I’ll give it a shot. That’s what happened on the morning of March 11, 2011 when news reached me about what happened in Japan. I made something to raise money, much the same as the ladies in the seniors’ home who held a bake sale around the corner from my house. I’d sell my poster via my online store and donate the proceeds to the Canadian Red Cross. A simple little idea, I thought. So I got started.

Within an hour my poster went viral.

I started getting phone calls from the New York Times and other big publications. The response was intimidatingly positive as I started setting up the print run, ordering shipping supplies and enlisting friends to help me with all the work. A LOT of work, hundreds of tubes to be packed, processed and shipped but it was definitely worth it given the cause. I couldn’t believe it.

Then the unexpected happened. Even if you have the best intentions possible, sometimes things can come out of left field to give you a knock. When a story, video, or piece of art goes viral it breaches the bubble of personal audience and goes out to the general online public, which exposes you to not only the positive, but to the negative. It’s no secret that the negative screams louder than the positive, especially with the anonymity of the internet. This was a harsh reality hit me head-on.

Each morning during my time packing, shipping, corresponding and donating I was receiving emails and blog comments from those who took it upon themselves to tell me I was doing something horrible. The remarks were almost frightening, ranging from harsh design critiques, cultural differences and personal attacks on my character. They’re all still live here and here, if you need some context. For a time I was even scared of answering my own phone. For a freelancer working alone out of a small home office, this wasn’t easy to deal with in the least. But I kept forcing the bigger picture into my head: the good cause.

This is when Fast Company decided to rear its head. In this article entitled ‘Is This Poster to Aid Japan’s Tsunami Victims a Crime Against Design?’, John Pavlus took it upon himself to voice his opinion about my charitable endeavour. It should be noted right away that neither Fast Company, nor John himself, contacted me for a statement prior to posting the article on their very well-travelled website. A pretty key mis-step in journalism I would well imagine, especially given the gravity of the topic at hand. Unknown to anyone but myself (and close friends), this article alone caused the most damage to me and my campaign, igniting not only a new round of harsh emails and comments… but this time, from within the design community. A field I love and respect. This alone caused me to almost shut down the campaign.

Despite all of this, the campaign was seen through and raised around $20,000 for the Canadian Red Cross as I shipped posters out of my basement. I said earlier, far and above the original little idea.

So, why am I writing this 2 years later? It’s not out of disagreement with nay-sayers and it’s certainly not an attempt to garner sympathy or encouragement (seriously, please withhold comments of that nature, guys). I’ve been running this blog for 5 years and I’ve always felt a certain responsibility to my audience (specifically designers) to discuss the industry through experience, as transparently as possible. We all have ups and downs, and we all have stories surrounding them. My reasons are 2-fold…

First, be careful. If your main goal is for something to “go viral” in whatever form, be careful. Your work will be reaching a much wider audience and in some cases people won’t think twice about voicing harsh opinion several times over to a complete stranger. Growing a thick skin only comes through experience. Even though you have the best intentions, your truth might get contorted and thrown under the bus. So be careful.

And second, stick it out. If you are doing something with nothing but the best intentions do NOT let those people stop you, whether they are anonymous critics or writers on respected websites. If you’re doing what you believe in, and you’re doing it for others don’t let an elusive negative force stop you, even if it sticks with you well after the fact.

2 years later, I’m thinking hard on all this stuff and despite the harsh language directed toward me, my design and my campaign, I wouldn’t have done it any differently.