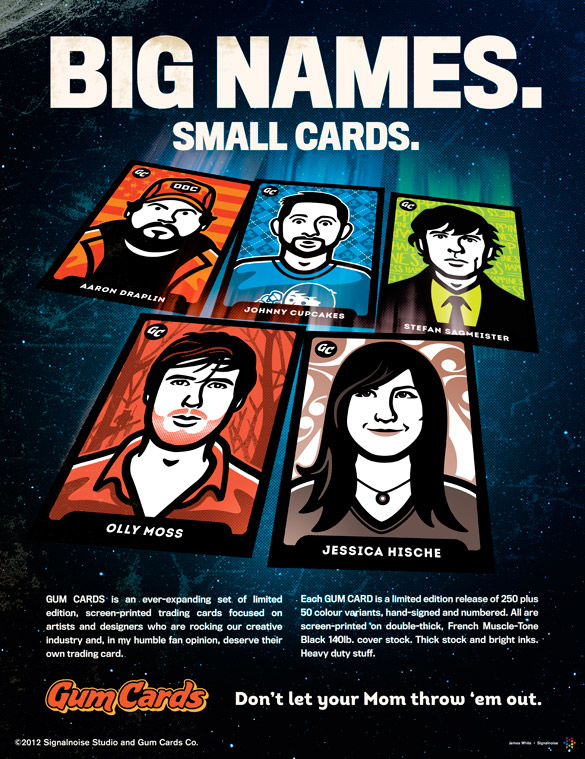 Since I came up with the GUM CARDS idea I’ve been thinking about the myriad of stuff I wanted to design around it to make the entire experience richer. One of the things I wanted to create was an advertisement as if it appeared on the back of a comic book in 1986. So I made one, inspired by old Lego and Nintendo advertisements from when I was a kid. Big names. Small cards.

So a bit of news. The clock is ticking down to the end of the GUM CARDS Indiegogo fundraising. As of next Wednesday it will be done, effectively wrapping up phase one of the project. So if you were planning on pledging but haven’t gotten around to it yet, time is running short. Cut in line to secure your GUM CARDS.

A lot has been happening since I kicked off the GUM CARDS project. 3 new cards have been revealed, funding goal has been met and production has begun. But the easiest way to discuss all of this stuff is live. So this coming Tuesday (the 7th) I’ll be doing a second special GUM CARDS SNBC broadcast discussing everything about the project. This will be the day before the funding period ends, so if you want to know more about GUM CARDS be sure to tune in live. I’ll tell stories, show some goodies and answer questions live.

Once again, a big thanks to everyone who has supported and encouraged the project. You have all made this experience incredible, and we’re just at the beginning.