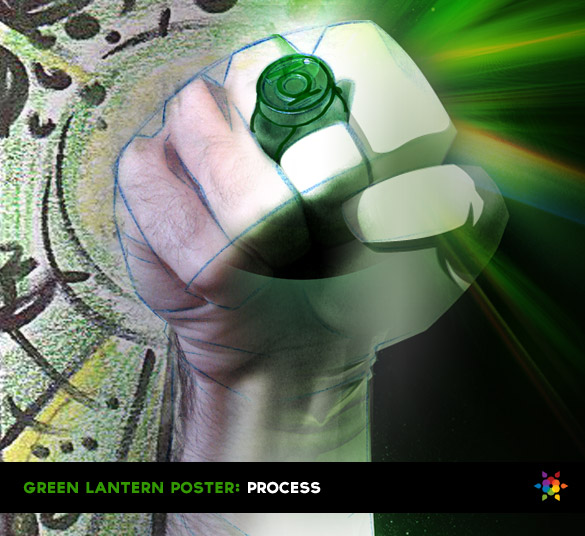 Last week I released my version of the Green Lantern movie poster (seen above), which I worked on in the studio over the course of 2 days from sketch to final. It was a lot of fun to create something based on my childhood hero, so I took care in keeping as much material as I could in order to show how I went about creating the design. So now, it’s time to look at the Green Lantern poster process.

Back in 1983 whenever me and the neighborhood kids played Superfriends, I was always Green Lantern because I thought he had the coolest powers. I even went to the extent of making my own little Green Lantern power rings out of paper, not until this one right here: 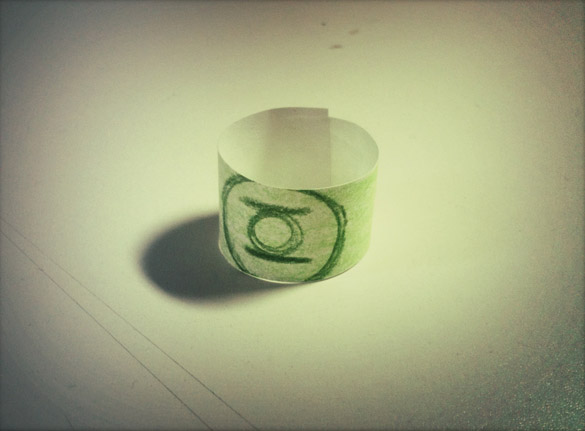 Outside of thinking his powers were cool and his ring iconic, Lantern has the best logo in the DC Universe aside from the staples of Superman and Batman. All of these aspects of the character led to a bit of disappointment when I saw the official movie poster release for the upcoming film starring Ryan Reynolds, and it’s complete lack of showing Lantern’s ring. I won’t get into a big rant about the industry as I’d be preaching to the choir. Modern film posters aren’t geared around art and design anymore, they revolve around whoever is starring in these things in hopes of drawing fans of the actors, unfortunately not the content.

Just to be clear, I’m not riffing on the quality of the official poster because its beautifully crafted. I just feel the essence and iconic elements of the character was lost under the need to showcase Reynolds. That’s all.

So I took it upon myself to design a poster the way I would want to see it, focusing on Lantern’s iconic power ring, its logo and the classic Green Lantern costume (or at least a portion of it). Let’s get rockin’. 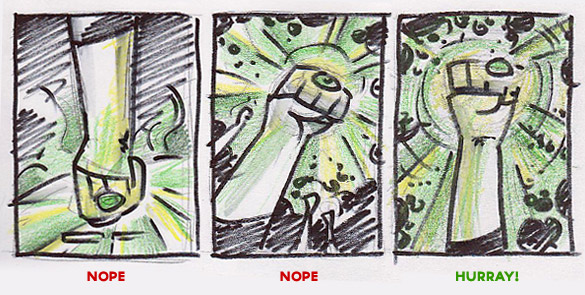 Like I’ve said many times on my broadcasts I start every project with the sketchbook, I started drawing up come rough ideas of how I might approach the poster. I knew I wanted to focus on the ring, but wanted to do something strong, iconic yet simple. Since the ring is actually really small, I needed a way of making it look interesting and powerful. After doodling up around 10 sketches, I decided the way to go was simply showing Lantern’s fist raised in the air with green light energy shooting out.

I’m sure the redesigned Lantern costume for the movie will look cool onscreen, but you just can’t beat the classic design. Hal Jordan’s white gloves were a must as the green ring contrasts beautifully on white, it just makes sense from a design standpoint. Shown here are a few of the reference images I dug up online, the Superpowers figure from 1984 (which I still own), the cover design for New Frontier #6 created by Darwyn Cooke and an Alex Ross painting because I love those green lights.

In the case of the fist design, I really wanted to capture what Darwyn did on New Frontier. His hands are typically 2-color yet have a lot of substance and structure. Once I had all of these references gathered along with my sketches, I had a good concept and direction going but I knew the biggest problem I would hit: where was this gloved fist going to come from? 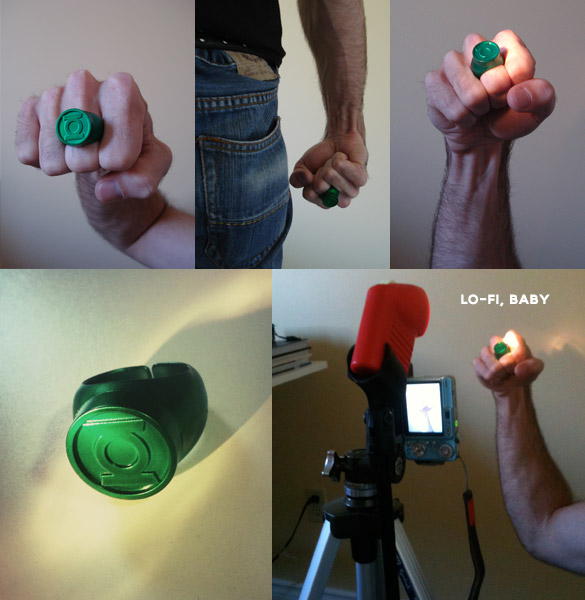 After looking around some stock photo sites for hands and fists, I knew I was never going to find a good looking hand at the proper angle. Everything I found had something wrong with it, plus there was the issue of getting a ring on there. I decided I’d do it myself and take some photos using my own hand to get exactly the angle I needed. I even had my own Green Lantern ring on hand thanks to my pals at Strange Adventures.

My photo set-up was hilarious. I grabbed my Canon Powershot, my Rock Band mic stand and a dollar store flashlight pointed at the ring to match the lighting I wanted in the final poster. It worked great and I snapped a number of shots in a few different poses in case a new concept or idea came to light. It didn’t, the fist was still the winner. 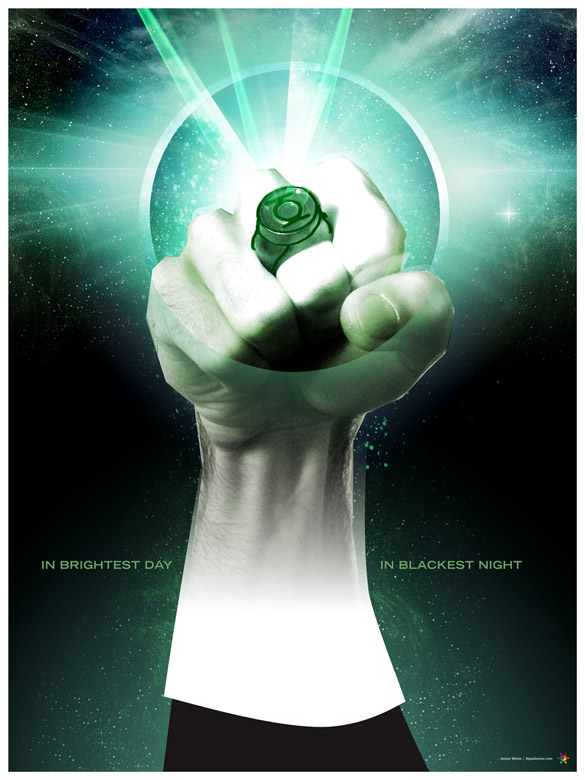 This next step is what I call the digital sketch. After working on a number of posters over the years I found myself naturally gravitating to this middle step between the sketchbook and building the final design, where I build a pre-viz rough version of how the composition might be. I use pre-made elements that work as well as elements I’ll be using later in the final.

In this digital sketch for the Lantern poster, I used one of the hand photos I took in the previous step, a bunch of lighting effects I had on hand and some cosmic imagery from NASA’s website. My concern wasn’t making the glove or anything look convincing, moreso to have a quick study to ensure I was still on the right creative path. My initial idea was to use more blues in the background to make the green energy stand out, but it made the palette look bleached out. I wanted bold green everywhere. I even went as far as to make a quick vector base for the glove.

This step took a few hours to nail down, but it was hugely helpful before I moved on to creating the final poster build. Now that my planning was complete, it was time to start building my elements.

I’ll be the first to admit, I kind of painted myself into a corner with this part. My goal was to make the fist look physical with weight and definition, but I didn’t want it to look like a photograph OR an illustration. Yeah, easy task huh? I had to build and rip apart the hand design 3 times over before I got the process down and could achieve the effect I wanted. Even tried one version where I digitally painted the entire thing, it looked awful. I had to go analog, man.

I printed off a copy of the fist photograph and grabbed my handy tracing paper. I taped everything down on my sketch table and drew the basic outline of how I wanted to fist to look, taking into account the glove, highlights and shadows. I tried to do this step in Illustrator but it was far too much guesswork, I needed to pull it away from the computer and do this step by hand to have complete control.

I then scanned the pencils, brought the drawing into Illustrator and mapped out all the elements in vector while experimenting with every gradient in there. The drawing was HUGELY helpful, something I’ll be taking into account with future posters. It was a great mix of realism and illustration and even looked like Hal’s hand. 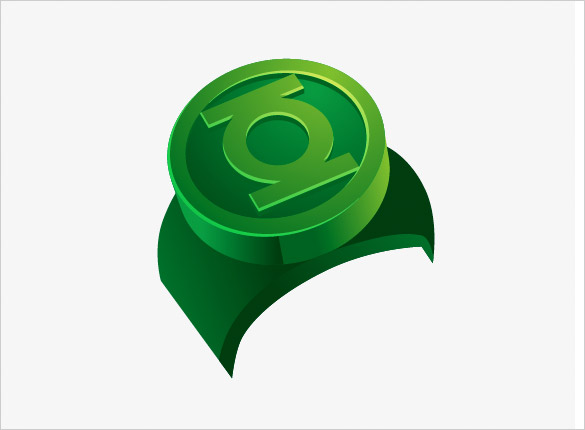 The ring was the easy part. Having a plastic ring onhand was a big help, but it was just a matter of matching the perspective and hitting the right combination of selective gradients.

v. Bringing it all together 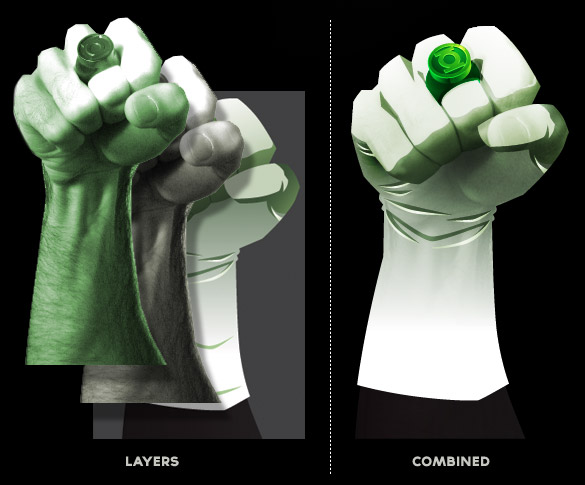 Things got a bit tricky here. Despite the gradient work, the vectors still looked really flat and I wanted something more substantial to give strength to the fist. I managed to achieve this by blending a couple of photographic overlays with the vectors. As you can see by the image above, I used a green tint and a greyscale version of my fist and set them to Overlay in Photoshop. This gave the otherwise flat vectors a more physical look, like there was a human hand in there somewhere. It’s totally an illusion but it created the effect I wanted.

I couldn’t get the proper fabric folds in Illustrator that I needed, this was a glove afterall, so I searched around Thinkstock and got some nice images of folded linen and satin which worked perfect for getting those wrinkles. I changed the images to either green or greyscale, and laid them over the vectors using blending modes Multiply and Soft Light. They worked great, kind of a fluke.

After the fist was built, it was just a matter of adding the green light energy, a few background elements and some selective shading. I’m not going to get too deep into how these were created because there are a bazillion tutorials online showing cool light effects, but mine were created using a combination of my vector shard elements and a few photographs I had onhand of flares and lights. Most of these lights were switched to greyscale, then I overlayed some green on top to keep things more dynamic. It involved a lot of experimentation.

And finally, I added the final content from the Green Lantern oath as well as the 2011 logo, eluding to the release of the upcoming film. Done!

The process behind this poster was extremely different then what I’m used to, but it was an excellent journey to nail down the effect I wanted. Having to create that hand from scratch was a strange one, but I’m happy to say it’s ME wearing that Green Lantern ring. Yeah! I hope you had a good time gaining a bit of insight behind this poster because I had a great time creating it. Now if you don’t mind, I’m going to don my mask on and bounce off the rings of Saturn.