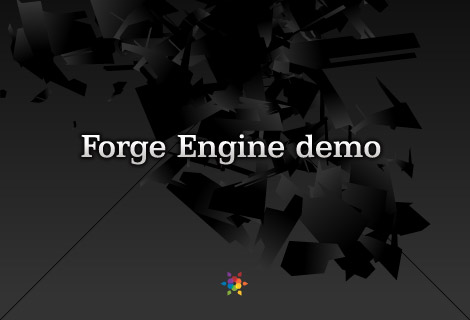 Since posting my Black Glass pieces over the past couple of days I’ve had some readers inquire about the Forge engine I use to create random arrangements of shapes. So I thought it a good time to upload a little demo of what the engine actually does, rather then trying to explain in detail. Check out the demo here.

I built Forge a couple of years ago, inspired by the engines Joshua Davis builds to create his artwork. Being the art control-freak that I am, I needed a tool that would help me relinquish some control over the elements I use and allow them to move and shift on their own, thus introducing me to new arrangements that I hadn’t previously thought of. I am certainly not a programmer, so I had to look up a pile of tutorials and examples online before I finally got the engine to do what I wanted.

The programming behind my engine would probably make developers gag, or laugh, or both. But as clunky as Forge may be, it has performed like a champ. So check out the demo to see how the engine works, and hit Refresh a few times to see that no two arrangements are the same.