A Signalnoise Odyssey, Part I

Over the years I have had several ideas for creative endeavors, some of which came to realization while others got shelved due to time-constraints or simply distraction. Some were silly, others far more then I could chew. However, there was one little project that never strayed far from my work flow, and because of how much joy it brought me I would try to slip in some time to work on it whenever I could.

So, I would like to dedicate a series of blog entries to this small project, the processes involved, how new ideas came about and how it evolved into something I had not originally intended. This is off the beaten path in terms of my typical body of work, and all starts around three years ago while I was doodling in my Moleskine book, when this little guy appeared: 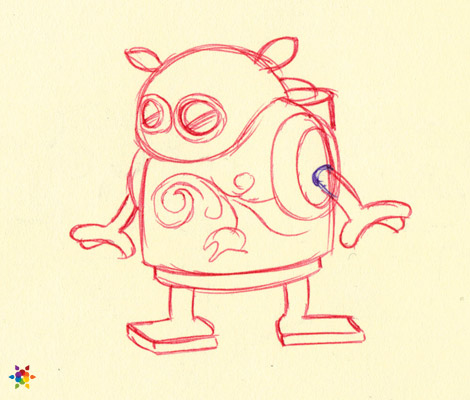 I had been drawing a lot of character-based cartoons at the time, most of which involved monsters, robots, aliens and the occasional pirate. I’ve designed hundreds (maybe thousands) of little characters all throughout my many sketchbooks, but this little guy deserved a bit more attention.

Over the following few days I spent a great deal of time roughing out his design and posture, sketching him from different angles, all the while pondering what his elusive backstory might be. 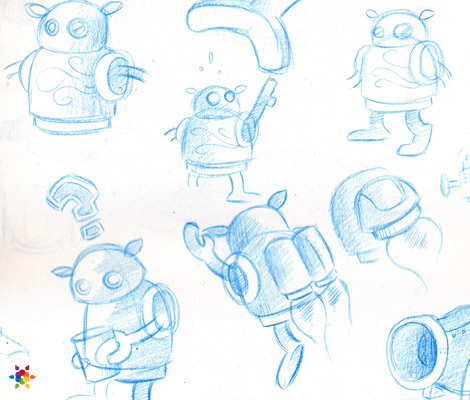 It was decided early on that this little guy would be from space, or a distant planet. I liked the odd mix of being a funny little robot, while at the same time having the innocence of some kind of woodland creature. His simplicity made him easy and fun to draw, yet still fairly expressive.

With every new project, especially character-based stuff, there are a number of different avenues one can explore for bringing characters and stories to life. My favorite comic strip artist Bill Watterson once said that his characters, Calvin and Hobbes, should never reside outside of the comic strip for that is their world. Good point there.

My next step was clear, to engineer a world where this unwitting little robot might live and discover a little more about him along the way.