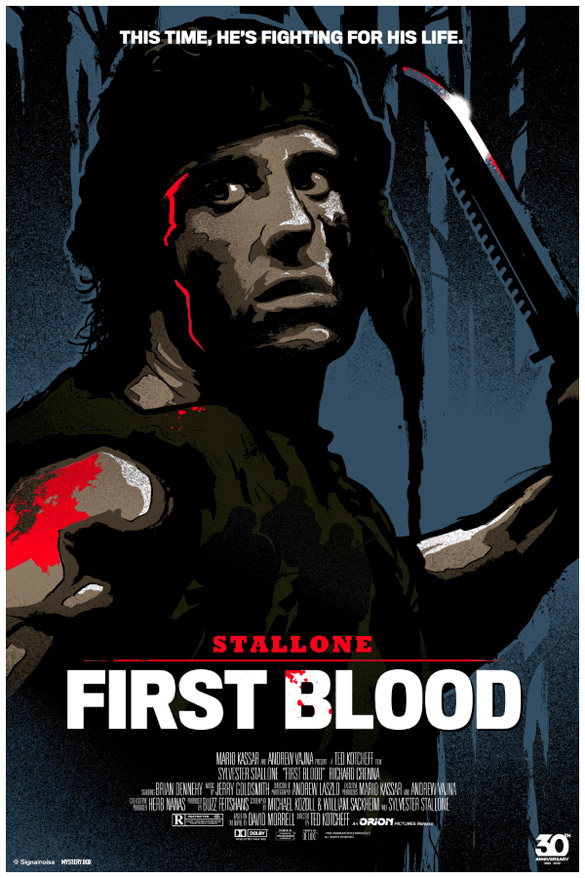 Here is my poster for one of my favorite movies of all time, FIRST BLOOD, celebrating it’s 30th anniversary. Yep, this beast of a film was released back in ’82 when I was 5 years old. After doing the DRIVE poster late last year I knew for my next work I wanted to dive into the past a create something I loved as a kid. When Mystery Box asked me what film I wanted to create a poster for, this was my first pick. They worked their magic, and we’re just waiting on a bit of red tape.

I wasn’t allowed to see FIRST BLOOD when I was a little kid. My parents said it was too violent so they would never rent the VHS for me, but I always caught little snippets of it when I was over at friends’ places. This, of course, made the movie even cooler because it was outlawed in our house. Something dangerous. But toys weren’t out of the question. I remember my mom ordering me the Rambo toy knife kit out of a comic book, and I got the Rambo figure for Christmas in ’86. That rocket-launcher was awesome. 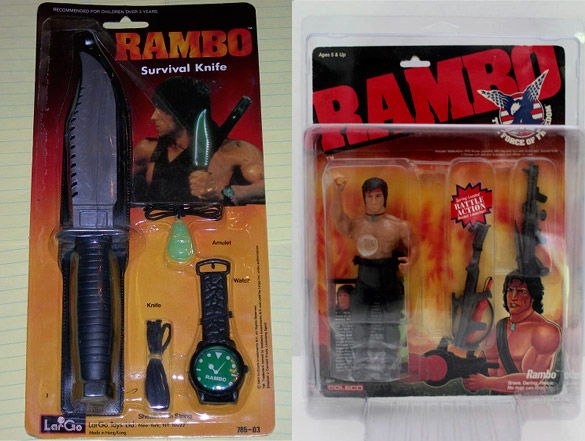 So to me (probably because of the rubber toy version), Rambo’s knife was one of the main characters of the film. He’s typically depicted with a big gun of some sort, but I knew for my poster I wanted that knife front and center. My favorite parts of FIRST BLOOD take place out in the woods as he’s beating up cops and the local makeshift army. Very natural scenery, with a Canadian tie as it was shot outside of Vancouver in a town called Hope. Other than sporadic outbursts, Sylvester Stallone’s character is relatively calm and determined during the movie. You never knew when he was about to cut loose. I wanted that reflected in my design rather than an action scene. Had to be about the character. 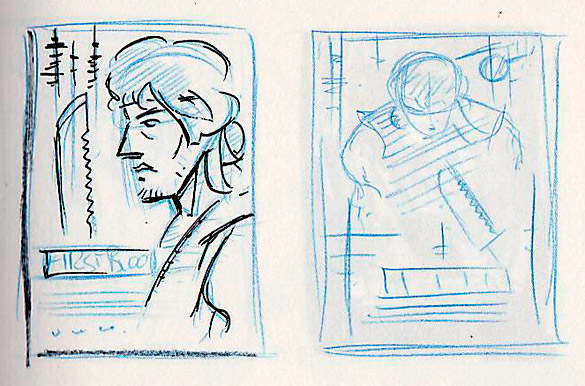 I did quite a few sketches, trying to dial in on the tone I wanted to hit and the elements I wanted to include. I then scoured the movie for some reference shots I could use before starting up the digital paints. Found the shot I wanted to work with and started some studies and final build. The original version had very different colours, but I switched to a palette that reflected those forest scenes I love so much. Here’s a few process shots. 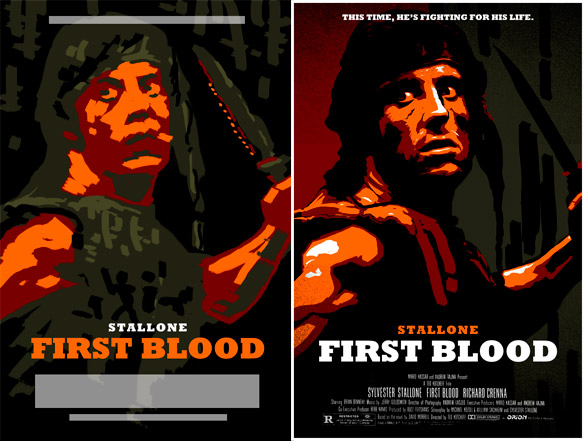 And a close-up of the final to show a bit of the painterly detail. 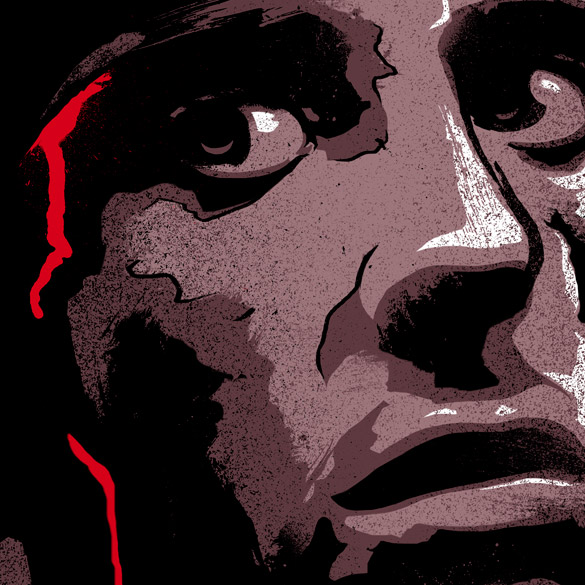 This is my second movie poster completed to this extent. As some of you know I did my first poster drop a week and a half ago for DRIVE and it was turbulent at best. I hit snags at just about every step and lost quite a lot of sleep as I tried to smooth out the speed-bumps I encountered along the way. I took some knocks, but learned some valuable lessons and tips along with some very helpful information. I owe a huge thank-you to the kind people at Expresso Beans who reached out to me and lent a hand with kind words, encouragement and advice. You know who you are, and I really appreciate it.

So, what will be different? My representation Mystery Box has been hard at work to set up a system to get my (and other artists they represent) posters produced, sold and shipped. First and foremost, we will be working with the mighty D&L Screenprinting in Seattle, a reputable company who does tremendous screenprint work. The FIRST BLOOD poster was designed specifically with screenprinting in mind and I’m excited to move into this new territory. 24″ x 36″, thick paper with a vicious colour variant. Mystery Box has also set up it’s own storefront coupled with a fulfillment company. This will be the platform where my posters will be sold, along with other Mystery Box artists.

We will be moving into production next week, and once we are further along I will have the onsale information to post. As always with these things, it’s best to follow me on Twitter to get details quick.

“THEY drew first blood! NOT me!”