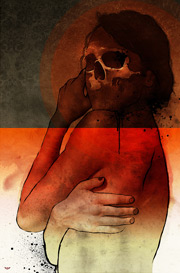 It was always my intention to allow this project to gain its own momentum and girth as I proceeded with my trial and error tactics. I tried a lot of different processes over the past few weeks (documented on my Flickr stream) as I tried to forge my own imagery using the tools I’ve been using for years. I started as mere sketches and continued to layer on more detail as I went on.

Last week I decided it was time to up the ante a bit, so I organized a photo shoot with my friend Sarah who was nice enough to allow me to use her silhouette in my new works. It was nothing advanced, simply my Canon Powershot camera on a tripod set up in my living room with normal lighting but it really allowed me the freedom to capture just the right shapes I was looking for. The warm-up composites were mostly found poses, but now I had the ability to really nail what I wanted visually.

As I started using her images, I quickly realized the difference in quality and it reduced the amount of headaches I experienced by using shots by other people who obviously didn’t have my kind of artwork in mind when they took the shots. This new composite, which I guess would be stage three, was designed at 24″ by 36″ and I will be sending it to be printed this week sometime to test color values and texture qualities.