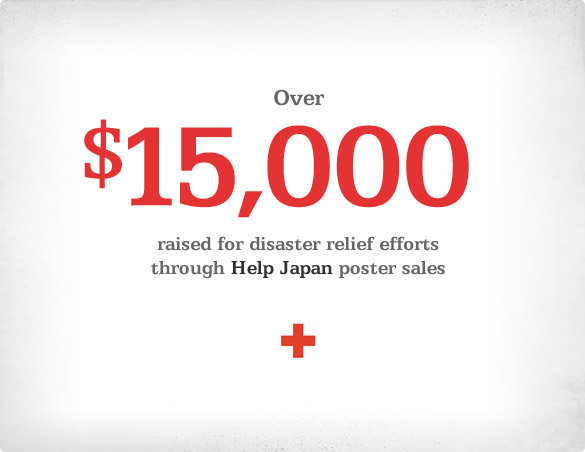 As of today, just over $15,000 has been raised through sales of my Help Japan poster for relief efforts after the 8.9 earthquake that hit on March 11. Half of that has already been donated to the Canadian Red Cross with a second donation imminent. Saying this initiative passed all my expectations would be a huge understatement. Thank-you so much for your continued support, everyone.

The last 2 weeks have been very busy so I apologize for not being able to keep the blog as up to date as I usually do. I’ve been spending a lot of time in the basement packing and shipping Help Japan posters since I launched the initiative, which is a challenge considering I’m just one guy who works from home. But I had some great people who helped me out along the way.

To my surprise the design reached every corner of the globe as relief efforts of all sizes were mobilized, from large to small. The poster was used by Japan Exchange and Teaching (JETAA) chapters in Canada for their fundraising events, a charity concert in partnership with the Japanese embassy in Paris, a Salvation Army event in Australia, numerous high school events organized by students from around the world, various homegrown support sites made for victims and families such as Prayer for Japan, and landed on the cover of Quakebook, an online publication of stories centered around the events of March 11. These are just a few examples.

A small, crudely printed version was even spotted near the checkout of a Korean grocery store in Toronto (seen below) with added and translated text. This is wonderful to see, the poster was adapted to a new environment and language urging people to help. Thanks so much to John O for the photo. 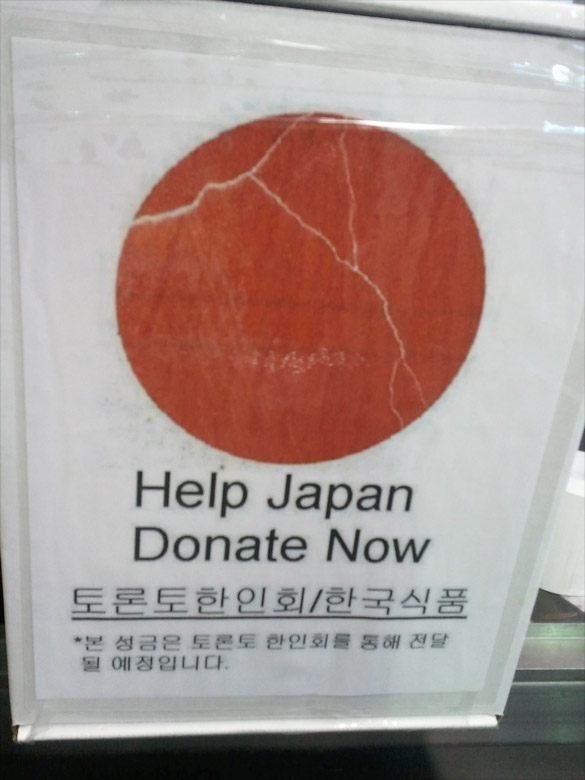 The poster took on a life of it’s own in just a few days, and went to places I myself will never see. The further it traveled and the more events that used it, the more charitable proceeds it helped generate. It’s still out there right now, doing its thing. A huge thanks to everyone who ordered a poster, posted it on their blogs, printed it out to stick on your walls, etc. Your support of this grassroots initiative truly means a lot.

As for me, I’m heading back down to the basement to prep tomorrow’s shipments.